Jammin’ Fast In The Open Water 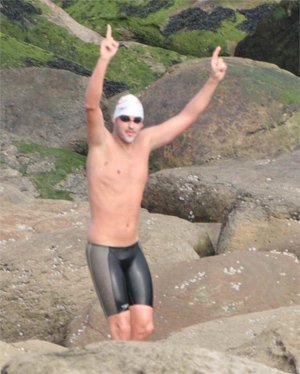 In the Marathon Swimmers Forum, Evan Morrison of the Santa Barbara Channel Swimming Association analyzed the opinions of 175 former, current or aspiring marathon swimmers from around the world. His comprehensive analyses are posted here.

Those 175 opinions present a very interesting snapshot of the community that includes at least 710 channel swimmers and 6,500 marathon swimmers in size. Morrison did an excellent job analyzing and presenting the information.

One of the non-controversial items among the myriad survey results was the use of jammers in the sport of marathon swimming. Unlike the old-fashioned wool swimsuits that admittedly felt warmer than today’s swimsuits made out of synthetic materials, jammers are widely used and sworn by men in both pool and open water swimming competitions, solo channel attempts and open water relays.

Although the jammers are overwhelmingly popular and accepted by nearly every governing body with the exception of the Channel Swimming Association, on the face of it, it appears – at least to us – that use of jammers run counter to the marathon swimming and channel swimming ethos to not use anything that offers an extra edge or that enhances performance. As Morrison points out in his analyses of the collective opinions in the marathon swimming community, “…In marathon swimming, if you’re flirting with this line – trying to find loopholes for some extra edge – quite simply, you’re doing it wrong.”

Steven Munatones observes, “My initiation in the open water swimming world began in 1968 so I am totally of the old school of open water swimming. Admittedly, my personal perspective is biased towards traditional men’s swimming briefs. In a test of jammers at the Open Water Swim Club, we definitely felt faster and ‘tighter and leaner’ while wearing two very snug-fitting pairs of jammers manufactured by Speedo and TYR. Additionally, this personal finding is reflected by the global choice of the world’s fastest swimmers – look at the Olympic and world championship finalists in various pool and open water races. Basically, everyone wears jammers. Because the Olympic pool finalists and world open water championship swimmers are all about speed, there must be some factual element of truth that jammers – either significantly or at least slightly – enhance performance.

Jammers are generally made of water repellent fibers in a form fitting design with carefully lock stitching technology to reduce water resistance. The fibers – not used in traditional swim briefs – reduce friction drag and are supported by a special compression fit that are specifically utilized to reduce muscle oscillation and skin vibration which reportedly promotes muscle oxygenation and reduces fatigue.

The use of jammers by male swimmers – and their equivalents in female swimsuits that extend down to the knee – are an advantage used by contemporary marathon swimmers that were not available to swimmers in the previous centuries (unlike bubble caps that have been around nearly 100 years). We wonder how much faster Greta Andersen or Penny Dean would have been with a compression fitting swimsuit since they utilized a 6-beat kick? We wonder what kind of time Ted Erikson or Philip Rush would have done on their multiple channel crossings aided by jammers?