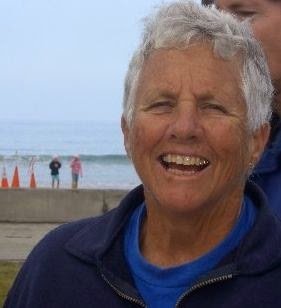 A swim out – paddle-out will be held at La Jolla Cove on June 28th for Janet Hill Lamott who passed away late last month.

The long-time member of the La Jolla Cove Swim Club, Lamott was the then-oldest (at 61 years) woman to swim from one Hawaiian island to another (Lanai to Maui across the Maui Channel). She also set the record for women ages 60-64 at the 10-mile Huntington Beach to Seal Beach, California swim.

From her age-group years as a competitive swimmer under the guidance of Florence Chadwick to her later years masters swimming while raising three swimming daughters, Lamott was never far from water. Even when she wasn’t swimming herself, she was outrigger canoe paddling for the Hanohano and San Diego clubs from age 50 – 58 between 1985 and 1993, and served as a support crew and pace swimmer for Carol Sing.

In lieu of flowers, donations will be appreciated for the Stephen Birch (Scripps) Aquarium and/or the Stanford Woods Institute for the Environment (preservation of coral reefs and fishes).