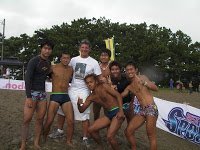 Yumigahama Beach is one of the 100 Best Beaches in Japan and one of the 100 Best Swim Beaches in Japan…and rightly so. The cove is protected from the rougher waters of the Pacific Ocean with a wide flat sand beach that is easy to navigate. The surrounding town is focused on tourism so the level of hospitality is outstanding amid the scenic beauty 70km south of Mount Fuji along the eastern coast of Japan.

From Okinawa to Honshu, Shinozaki-san and his staff and volunteers have created an enjoyable, safe, competitive open water swim series for all ages and abilities. From the pre-race beach clean-ups to comprehensive safety considerations, Shinozaki-san continues to promote and professionalize open water swimming in Japan (see his WOWSA nomination below).