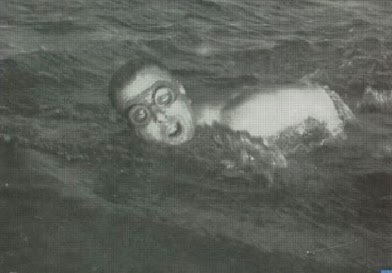 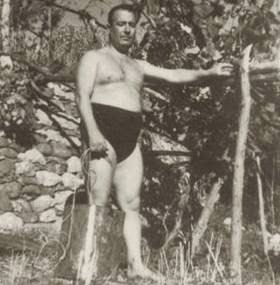 “Jason Zirganos, 48-year old retired army major from Volos, Greece, swam the Catalina Channel from the island to the mainland in 17 hours yesterday. Greased from head to toe, Zirganos dipped into the stormy waters off Howland’s Landing at approximately 8:30 P.M. Sunday. Four boats accompanied the veteran swimmer as he battled huge ground swells and choppy waters. Several times during the night rain-drenched boats lost sight of the swimmer. Zirganos was only a mile from the mainland 12 hours after his start. Bucking a severe tide at that point, it wasn’t until five hours later that he came ashore on the rocks at Portuguese Bend…”

It is said by a few that Major Zirganos was the first person to complete the Triple Crown of Open Water Swimming because Greek newspapers reported that he completed a circumnavigation of Manhattan Island in addition to his four successful English Channel crossings and his 17-hour Catalina Channel crossing. But no records of the circumnavigation have been confirmed by the NYC Swim that governs swims around Manhattan Island.