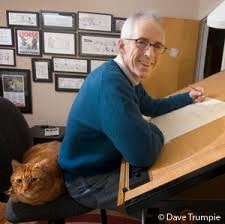 We have an exciting collection of swimmers from across the United States and around the world, including Penny Palfrey from Australia
.”

One of the registrants, Jef Mallett, is the artist/creator of the comic strip Frazz [see above]. “Jef is an accomplished triathlete, but the 8 miles of the Boston Light Swim will be his longest swim ever. The comic strip here is his statement to his goal. The T-shirt Frazz is wearing is homage to the Nahant Knuckleheads,” described O’Connor.

Mallett describes his goal without a wetsuit in characteristically endurance-oriented terms.

“I am now signed up for the Boston Light Swim. It’s 8 miles of point-to-point ocean swimming. Chilly water, no wetsuit. Oh, and there’s a time cut.

But with the right preparation and a whole lot of persistence, I just might belong there when it’s Go Time this August.

Honestly, I haven’t been this nervous about an event since I signed up for my first Ironman. But I kind of like the feeling. Scared to death is my comfort zone. Out of my element is my element. Grow or die. Life is flying in a rented plane, so flip the thing and turn on the smoke. Choose your aphorism.

It all boils down to this: I’m in the water now and the boat’s gone, and there’s just one way home. Here I go.”