Jemma Dessauvagie Having A Ball In Lake Argyle 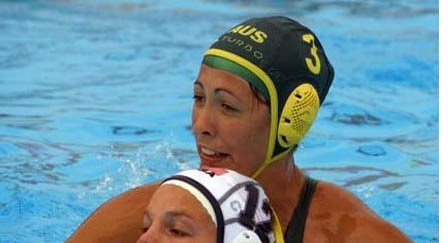 She debuted on the Australian national water polo team at the age of 18.

During her lengthy career, Dessauvagie played a total of 58 international games and competed at three World League Super Finals and the 2009 FINA World Championships in Rome. She was a team player as she captained her national league club team in two different seasons and was named in the National all-star team twice.

Her sense of teamwork will be on display in the 20 km First National Kimberly Lake Argyle Swim in Australia on May 3rd. “Jemma will be leading a team of talented swimmers in the 20 km Quad category,” says Glenn Taylor, race director of the 2014 First National Kimberley Lake Argyle Swim. “With good conditions, they could threaten the course record.”

Jemma Dessauvagie knows what it takes to success in a team sport. Her description of being a water polo player is very appropriate for her upcoming swim as an open water swimming quad relay member. “My years in the national team were the hardest and best of my life so far. Even through the ups and downs, pressures and inconsistencies that is a life and career in sport, the whole experience is something I will cherish. I had the privilege of doing something that I loved and to tour all around the world doing it – an opportunity few people are afforded. I loved the feeling of camaraderie being a part of the national team. One of the great things about team sport is that you are never in it for yourself, you are accountable to every one of your team mates and everything you do affects them in either a positive or negative way. Everyone was always there for each other.”