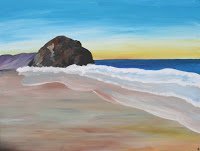 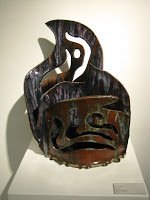 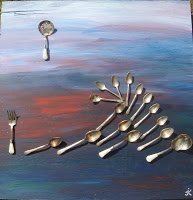 Jen King‘s artwork reflects her experiences in and near water. “Since both art and water are passions of mine, they frequently correlate to one another. In many cultures, water symbolizes rejuvenation and energy, which is what I try to show.”

“Morro Bay” (acrylic on canvas) is a painting of one of my favorite places to visit. Just sitting down by the water has a healing effect; the peaceful sound of the waves and the calm coastal breeze are some of the best relaxants anyone could have.

“Nightwave” (high-fire ceramic on left) is symbolic of the fiercer side of water.

The ocean is unforgiving, and it can take just as freely as it gives. It expresses immense power and strength, and it never ceases to move.

This sculpture in particular incorporates the ever-changing flow of the ocean with the mysteriousness of the ocean at night.

“Silver By Moonlight” (acrylic and silver on wood below) is an abstract representation of the effect of moonlight on the water at night.

As serene as it is magnificent, the ocean at night ripples with silvery reflections as the waves dance along the shore. The actual silverware on this painting will catch and play with the light just as the water at night might.

“Have you ever looked at the water in an ocean or lake and tried to describe the color of it? It is nearly impossible to do this because of the way the light can play with the water.

In my paintings, I love to mix multiple shades of blues and greens, and sometimes other colors, to represent the beautifully constant change of the color of water.”

More of Jen’s artwork can be seen here.