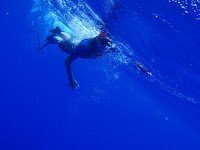 60-year-old Jennifer Figge is getting ready to set sail on her fourth continuous stage swim across the Atlantic Ocean.

Her D5000 Dean Catamaran is being readied in Cape Town, South Africa and will soon take off for the Cape Verde Islands, off of Dakar, Senegal in the western Africa, where she will start her adventure towards the Caribbean Sea. Figge will be escorted by Captain Tamas Hamor and First Mate Sara Hajdu, a pair of experienced cross-Atlantic sailors from Hungary.

Figge swims up to 8 hours per day, being escorted by her escort catamaran facing whatever marine life and conditions that arise. When she is not in the water, she boards her boat and rides the currents as she slowly make her way across the Atlantic. Destination: the other side.

Either type of stage swim can be Assisted or Unassisted. If Assisted, the swimmer can wear or benefit from a wetsuit, protective swimwear, technical swimsuit, fins, paddles, wetsuit, shark cage or protective jellyfish cage. If Unassisted (a la Dan Martin‘s planned Global Triathlon swim leg across the Atlantic Ocean), the swimmer wears only traditional swimwear (as defined by the English Channel swimming community), goggles, ear plugs and one swim cap. In either Assisted or Unassisted swims, the stage swimmer can swim together with a pace swimmer.

Assisted or unassisted, continuous or not, swimming across an ocean is an adventure that takes time, resources, guts, planning, an extraordinarily dedicated and experienced support crew, and a good amount of good fortunate to avoid accidents and bad weather.

For more information, Figge can be followed here.