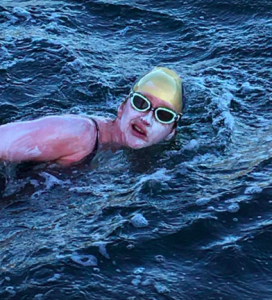 One of the pleasant surprises of the 2018 Open Water Summit at the Olympic Club in San Francisco, California was the humorous, very well-received speech by Canadian marathon swimmer Jessi Harewicz.

With a rapid emerging track record of unprecedented swims and traditional marathon swims around the world, Harewicz was named one of the World’s 50 Most Adventurous Open Water Women in 2019.

She continues to ramp up things this weekend. On August 25th, she will attempt a 60 km solo swim from Nanaimo to Vancouver in the Salish Sea in British Columbia, Canada. “This 60 km route may take 18-30 hours,” she predicted.