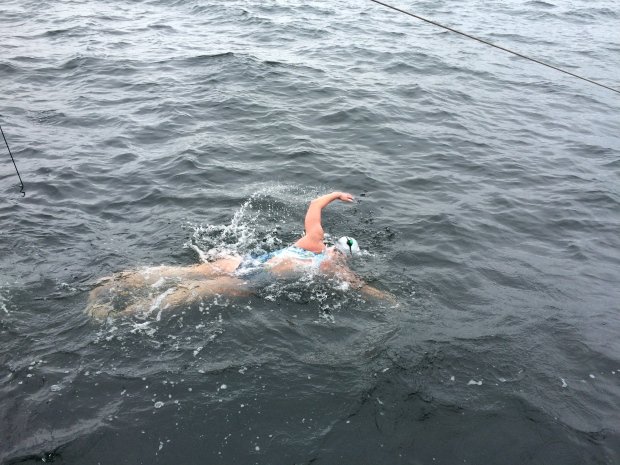 The roll call of swimmers who have crossed the Strait of Georgia between Vancouver Island and the mainland coast of British Columbia is not long:

Now add Jessi Harewicz to the list after her June 25th 11 hour 20 minute 30 km crossing from Sechelt to Nanaimo under the guidance of pilot John Dafoe.

She is grateful for the amount of assistance she was given. “I have met Rachel Schoeler many times before. Rod Craig was my observer. Most of my advice came from SwimTrek with Fiona Southwell and Kevin Murphy helping me network.

My father and I fell in love with the waters of British Columbia last year. I have a pool coach, but I realized that if I have someone who knows me very well and can kayak and feed with me, [then] we can go and swim in the gulf islands with only a short car drive.”

She acknowledges her luck with the conditions. “I had a bit of chop, but it was fine. Like it wasn’t easy, but I’ve swam in worse conditions, I’ve been colder, I’ve swum in colder water and I’ve been way more seasick and I’ve been stung by way more jellyfish.”

A radio interview with CBC’s Chad Pawsonof is posted here.