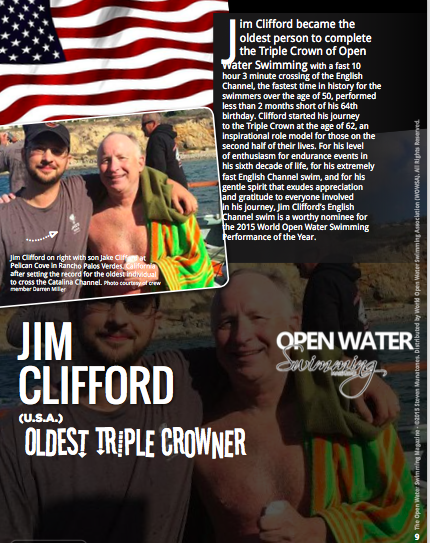 63-year-old Jim Clifford is not one to tout his physical talents, but his channel swims this year certainly proved how talented the low-key American is.

This year, Clifford not only ripped off the fastest English Channel crossing of anyone in history over the age of 50 (less than 2 months short of his 64th birthday), but he also became the oldest person to complete the Triple Crown of Open Water Swimming with his 10 hour 3 minute crossing.

Clifford started his unexpected journey to the Triple Crown at the unprecedented age of 62.

His disciplined lifestyle and aquatic goals are packaged in an exceedingly friendly inspirational role model – especially for those on the second half of their lives. What also makes him such a positive role model is his gentle spirit that exudes genuine appreciation and heartfelt gratitude to everyone involved in his journey.

For his efforts and mindset, his English Channel swim is nominated for the World Open Water Swimming Performance of the Year. To vote for the WOWSA Awards, visit here until December 31st 2015.