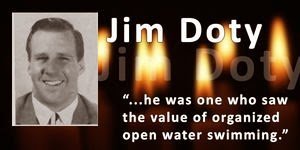 The third annual James Doty Memorial Mile Swim will be held on June 14th at the L Street Bathhouse (Curley Community Center) in South Boston, Massachusetts. As Doty did throughout his life encouraging others to join him in waters all around New England, the swim is dedicated to those new to the sport.

Doty accomplished so many things in his life, it was remarkable how much time he was able to devote to the sport of open water swimming. Time management was one of the essential elements of his success. So it is appropriate that two new clocks installed earlier this week in the tower on the L Street Bathhouse will be dedicated in memory of Doty at the memorial swim.

The event, organized jointly by the Massachusetts Open Water Swimming Association (MOWSA) and the New England Marathon Swimming Association (NEMSA) with support from the Curley Community Center and the Doty family, highlights the legacy that Doty left behind. “Jim and his series of unprecedented swims in New England set the gold standard for open water swimming in the region long before the sport became trendy,” says Greg O’Connor of MOWSA. “His imaginative approach to finding new challenges has left a long list of swims many of us can only dream of completing someday. We remember Jim fondly for the support and guidance he always offered to other swimmers and for his dedication to the cause of cleaner water.”

Doty, who passed away in 2012, was a local legend who charted new marathon swim routes and adventures all around New England. He picked up open water swimming in his 30s to gain some fitness and transformed his natural athleticism and competitiveness to became a professional marathon swimmer. He competed in in the 24 Heures La Tuque event in the 1960s and set numerous records to and from the Boston Lighthouse, Graves Light, around Cape Ann, and other iconic locations. “There isn’t a body of water in New England that Jim didn’t swim. Jim was also responsible for forming the non-profit New England Marathon Swimming Association which is dedicated to promoting swimming and a clean aquatic environment in New England. Jim re-started the Boston Light Swim back in the mid-1970s after a long hiatus; the 8-mile Boston Light Swim is the oldest open water swim race in America dubbed The Granddaddy of American Open Water Swims,” explains O’Connor.

Doty, a stalwart in the solo marathon swimming world, was never one to stop encouraging others to join him and seek their own potential in the open water. In 2010, O’Connor and Elaine Howley broke Doty’s 1969 record for the 16-mile double crossing of Boston Harbor. Leading up to that swim, Doty characteristically offered insight and advice, a kindness that offered an unparalleled opportunity for a new generation of local swimmers to learn from the consummate professional. “After that swim, Jim was so genuinely pleased that someone was looking to continue his swimming legacy that he took us out to lunch to congratulate us for breaking his 41-year-old record,” Howley says. “That’s just the kind of guy he was, and we are pleased to be able to run this event in his memory.”

Prior to the start of the swim at 1 pm, the Curley Community Center will host a dedication ceremony for the two new clocks that have been installed in the clock tower. The clocks were paid for by private donations and aim to help swimmers training in the harbor know how long they’ve been swimming. The dedication ceremony will begin at 12:30 pm.

“We like to think that Jim would be pleased with this small gesture of thanks for his leadership in open water swimming,” O’Connor says. 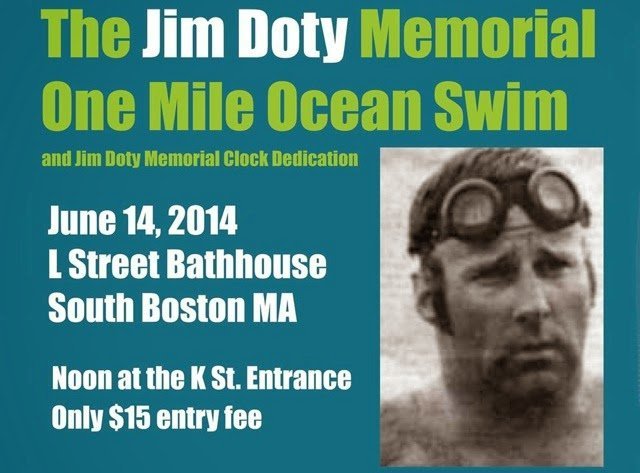