Jim Dreyer To Attempt The Impossible 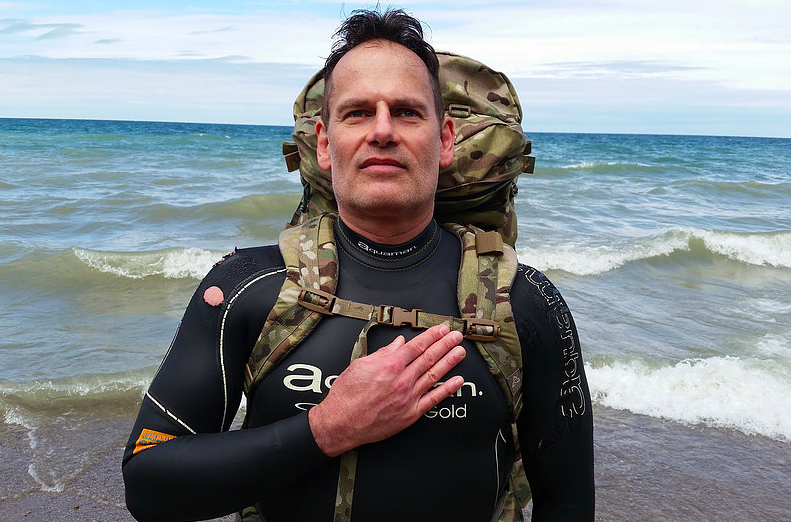 Jim ‘The Shark’ Dreyer will attempt an unprecedented triple crossing of the Catalina Channel in 2017.

But it will not be a typical or traditional attempt. He is going to swim a bit further than the normal course, between Santa Catalina Island and the California mainland. He is going to swim between Catalina Island and the Battleship Iowa Museum in Los Angeles Harbor. This will add another 2.2 miles on each leg for a total of a 73.2-mile (117.8 km) three-way crossing.

And Dreyer is planning to go even a step significantly further.

The swim will be documented and televised by the new TV show, Warrior Outdoors, scheduled to begin airing in the fall 2016. “Furthermore, beginning immediately, I will donate 50% of my [motivational] speaking fees to the Warrior Outdoors mission of helping U.S. military veterans and homeland first responders afflicted with Post Traumatic Stress Disorder (PTSD), summarized as Healing for Heroes.”

Dreyer is swimming with 80 pounds on his back for symbolic reasons. “This swim, and series of follow-up swims, is to honor and support our true heroes from which I myself draw inspiration. I’m speaking of the valiant men and women who serve in our military and as first responders, and are willing to offer the ultimate sacrifice for our freedom and public safety, against all enemies foreign and domestic, and against natural disasters.”

Warrior Outdoors’ primary endeavor is to eliminate the estimated 22 veterans suffering with PTSD who take their own lives daily, by getting veterans and also first responders involved in a wide variety of entertaining outdoor activities that foster camaraderie and gives them an outlet for their specialized training in the civilian world. These activities will be featured on Warrior Outdoors, a TV show airing on the Pursuit Channel which is broadcast to 38 million American households with the capability to be streamed on electronic devices. Warrior Outdoors is hosted and produced by Randal Reeder whose film credits include Deadpool, Sin City, 21 Jump Street, Oliver Stone’s W among others.

“I figure that for every 25th speaking engagement, between US$125,000 – US$215,000 will be generated for Warrior Outdoors. It’s the ultimate ‘win-win-win’ for the hosting organization, when it comes to cause marketing, sports marketing, motivating their employees to maximum achievement, and overall exposure.

Every event in this series will be a record [swim] because it’s never been done before. I want to make it clear however, that my records will not break the records of other swimmers who wore the required uniform of a sanctioning body. There is no sanctioning body for swimmers wearing full military gear, including an 80-pound backpack. Wearing that backpack during my events, on land and sea, will be my new trademark.”

Daily News of Open Water Swimming: Why the 80 lbs. backpack? Is that standard issue?

Jim ‘The Shark’ Dreyer: Different military missions require varying mandatory gear lists to be carried, but by in large, the gear list is usually around 80 pounds.

Daily News of Open Water Swimming: Will the backpack be worn on your back? Will it be made of textile and what will be inside to make it weigh 80 lbs.? Isn’t a dry 80 lbs. backpack significantly heavier when it gets wet?

Jim ‘The Shark’ Dreyer: While my NICE 650 is currently the best military pack available, it is still made of textile and is not waterproof. The pack itself will soak up water, but inside I will have 80 pounds worth of equipment from the mandatory gear list, plus some optional equipment if needed to make 80 pounds. The actual equipment will be contained in 22 waterproof containers inside the pack. The 22 containers represent the 22 veterans with PTSD who die by suicide each day.

Daily News of Open Water Swimming: How will you swim with an 80 lbs. backpack on? It has got to be extraordinarily cumbersome. Won’t you be much lower in the water than normal? Will it impact your arm stroke in any way?

Jim ‘The Shark’ Dreyer: It is going to be difficult, but like the military, I will have to adapt, adjust and overcome. I would rather pull a 30-ton boat than to have 80 pounds ON me. One good thing is that the NICE 650 has a flexible frame that moves with your body. This will allow me some semblance of a roll. We are still working on the proper adjustment of the shoulder straps to optimize my stroke … but I think it’s safe to say that my stroke will be altered to various degrees.

Daily News of Open Water Swimming: Will you use a wetsuit or fins or hand paddles on your Catalina Channel three-way crossing?

Jim ‘The Shark’ Dreyer: I will wear a wetsuit like the Navy Seals and Navy Combat Divers do. I will not wear fins or hand paddles.

Daily News of Open Water Swimming: To swim across the Catalina Channel and then inside Los Angeles Harbor?

Jim ‘The Shark’ Dreyer: Yeah, it’s a little intimidating, isn’t it? While I haven’t actually cleared this with authorities yet; it won’t be until 2017, The USS IOWA is part of this event and a Hollywood production crew will be filming. So while I expect a little red tape, I’m confident it can be overcome due to the charitable and patriotic purpose … along with the involvement of the other aforementioned parties. When I filmed Stan Lee’s Superhumans for the History Channel, I was allowed to swim in the Newport Beach Harbor, which is normally not permitted.

Daily News of Open Water Swimming: Who is your pilot and escort crew?

Jim ‘The Shark’ Dreyer: I have not selected a pilot yet, but I wanted to make first sure the Catalina Channel Swimming Federation knows that while I would claim a record because this [type of swim] has not been accomplished before, I would not claim to break the record of any other [traditional bioprene] swimmer who [follows the rules] required by the sanctioning body.

Daily News of Open Water Swimming: How old will you be in 2017?

Jim ‘The Shark’ Dreyer: Ugh. I will be 53 in August 2017. When it comes to age, I am a bit of a freak. I seem to still be improving as a swimmer, biker, paddler and climber. The only area where I’ve noticed a decline is running because of the beating my knees have taken.

Daily News of Open Water Swimming: How do you train for such an event? Can you shed any light on your training secrets?

Jim ‘The Shark’ Dreyer: Well, there’s nothing like getting out in the open water and practicing with the backpack. As I get closer to the Catalina Channel swim, I will be swimming significant distances with the pack, in all kinds of conditions … hope for the best, but prepare for the worst.

I also do quite a bit of swimming-specific strength training. This involves 3 or sometimes 4 different methods. One has me tied to a pool wall or dock with bungee cords, wearing hand and forearm paddles – essentially turning my arms into boat oars from the elbow down and swim hard in place for long sets. The resistance increases exponentially, the harder you swim.

A second method is the same theory as the first, except I’m pulling a 20-gallon bucket with just a 1/2-inch diameter hole cut in the bottom. The reason I do the bucket in addition to stationary swimming, is that by actually moving, it forces you to keep better form when tired, and not get sloppy.

The third and fourth types of strength training involve either swimming specific weight training using pulleys, or doing a type of push-up I call swimming push-ups. These push-ups start from the floor with both arms extended fully in front of you in the entry position. Then you pull your body from the floor as far forward as possible into a push-up position, until your arms are in the follow-through position and you have lowered your body back to the floor. From there, you then push your body back up into a push-up position, while pushing your body backwards, until you are once again on the floor with your arms extended in front of you once again.

To learn more about more about Dreyer and Warrior Outdoors, visit www.JimTheSharkDreyer.com.