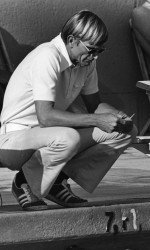 Standing in the midst of hundreds of masters swimmers, fitness swimmers, and competitive swimmers on Kaimana Beach at the start of the Waikiki Roughwater Swim on several occasions has been James ‘Jim’ Gaughran.

There is not much to distinguish Gaughran from his fellow ocean swimmers decked out in his Speedos, swim cap and goggles swinging his arms getting ready for the gun start…except his Olympic pedigree both as an athlete and coach.

And what he shared with his athletes in terms of competitiveness, technique, and training, he also has retained himself as his multiple age-group victories in the annual Waikiki Roughwater Swim in Hawaii can attest.