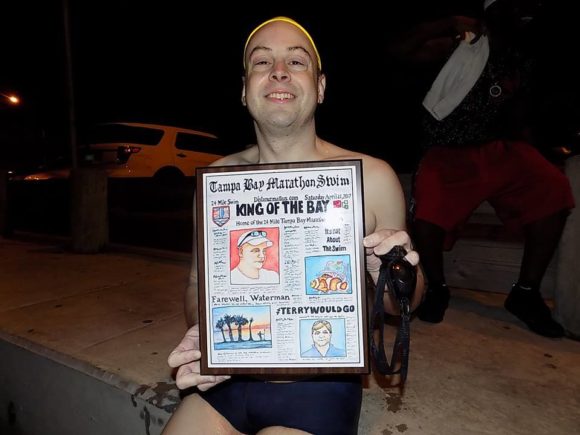 “It was quite the swim. Anyone who has completed a swim of 24 miles, regardless of stroke, has done something incredible,” admitted the humble mathematician from Littleton, Colorado who explains his swim below.


Daily News of Open Water Swimming: What made you want to swim 24 miles butterfly?

John Batchelder: Well, first of all, ever since I was about 6 I’ve been able to swim fly rather easily, and I don’t really know why that is. I was at best an average swimmer, but boy I could swim fly for long periods of time. I did a few 500-yard flys in high school practices, but I never attempted anything longer. I stopped swimming after high school and only got back into it about 4 years ago after a 15-year absence when I started swimming for a local masters team. That’s when I fell in love with long distance swimming, and remembered just how much I enjoy swimming butterfly and just how easy it is for me. Over the few years, I started playing around with swimming longer and longer distances butterfly, such as swimming the mile fly at a local swim meet and swimming over 4000 yards fly for the 1 hour USMS ePostal. Then, in August, 2015, I swam butterfly in the Horsetooth 10K in Fort Collins, Colorado, completing the swim rather easily in about 3 hours 15 minutes. That’s when I knew I could swim even further than that.

In April 2016, Tampa was going to be my first swim attempt of over 10 miles, as well as my real ocean swim. My goal then was just to complete the swim doing freestyle, but high wind conditions forced the swim across the bay to be canceled, and I declined to swim in the alternate, closed course, which also ultimately was stopped just a few hours in. At that point, I committed to returning in 2017.

Then in June came the 36-mile END-WET swim. Again, I went in with a goal just to finish, still not having completed a swim of over 10 miles. There, I heard Dan Projansky had previously swum the race butterfly and was going to do so again. That’s when I started thinking that I could probably also do the swim fly, having previously done a 10K fly with no issues. So on a whim, I tried END-WET butterfly, and came very close to completing it. I didn’t have the proper feeds, and then when it was starting to turn dark, I didn’t trust myself in low-visibility conditions and withdrew from the race just a few miles from the finish.

And so, when Tampa came around this year, all my friends started asking if I was going to swim it fly. Having been so close to finishing END-WET, I said, “Sure, why not.” Once word started getting out, it got to a point where I just had to do it.


Daily News of Open Water Swimming: When the conditions became turbulent, did you change your butterfly stroke in any way?

John Batchelder: The conditions at Tampa were very calm throughout the swim. There was a little bit of chop, but not much. Having done other, albeit shorter, butterfly swims in choppier water, I do know my stroke doesn’t really change in turbulent conditions. I might adjust my stroke rate to sync up to the rhythm of the waves, but that would be it.

Daily News of Open Water Swimming: Did your neck or lower back hurt in any way during the swim – or any other particular body part?

John Batchelder: During my 10 km fly at Horsetooth Open Water swim, I experienced a little bit of lower back pain and some shoulder tightness. I didn’t experience either of these ailments during my END-WET attempt, but felt pain in my forearms of all places, with a little bit of soreness in my biceps and triceps. For my Tampa swim, for the first 22 miles, I didn’t feel any pain whatsoever. It was actually quite surprising. But then, with the tides pushing me back and being so close to the finish, I started picking up the effort and I really exhausted my right arm, so much so that for that last mile I was getting almost no power from the right side of my pull. My shoulders actually held up pretty good, it was just my upper arm muscles that started to fail me.

Daily News of Open Water Swimming: How often did you stop to feed or rest?

John Batchelder: I started with half-hour feedings for the first 6 hours, then switched to 15-minute feedings.

Daily News of Open Water Swimming: When you stopped for a feeding, did you eggbeater (tread) water or stretch?

John Batchelder: I treaded water during feedings. A little bit of stretching closer to the end of the swim.

Daily News of Open Water Swimming: Was your stroke count consistent throughout the swim?

John Batchelder: I never pay close attention to my stroke count, but it definitely was not consistent during the swim. There were stretches here and there where I would pick up the effort a little bit or ease off a bit, all depending on how I was feeling at that moment.

Daily News of Open Water Swimming: Did you swim at any particular pace throughout the swim?

John Batchelder: I didn’t pay attention to my pacing during the swim. I just swam nice and relaxed for pretty much the whole way. I picked up the effort a bit too much a few miles out, but otherwise I just stayed relaxed.

Daily News of Open Water Swimming: In a channel crossing, one is often told not to look forward or not to look back. But in butterfly, you can only look forward. How far out could you see the finish? What were you thinking when you were staring at the finish for so many hours?

John Batchelder: I honestly didn’t see the actual finish until I was maybe 50-100 meters away, but this was because I have poor nighttime vision and it was completely dark when I made my approach to the finish. I wear prescription goggles, but they don’t fully correct my vision. However, I could see the street lights maybe a mile out, but until I got really close, I had no sense of how far away the lights were, and no idea how far back they were from the finish.

Daily News of Open Water Swimming: What is your next challenge?

John Batchelder: I’ve got a bunch of swims lined up this year, but I’ll only mention a couple. Next up is S.C.A.R. Swim Challenge down in Arizona just a couple weeks away. I’m planning on doing that swim series butterfly as well. Speaking of which, my friend who was going to kayak for me can’t make it, so I’m currently looking for a kayaker for the last two days, on April 28th and 29th. If you happen to know anyone from the area who might be able to help out, I would appreciate it greatly. After that, I need to redeem myself and complete END-WET this year.

Daily News of Open Water Swimming: How do you train for 24 miles of butterfly? Can you provide us with a summary of your typical weekly or monthly training regimen, including in the open water and in the pool and on dryland?

John Batchelder: The primary focus of my training isn’t on marathon swims, but rather my focus is on events for swim meets, particularly the mile and the 200 fly. My training varies greatly depending on how other things in my life get in the way, but so far this year I probably swim on average 4-5 workouts a week in a pool, averaging about 5000 yards each workout. Last year, I put in more distance and totaled just short of 900 miles for the year, whatever that works out to be. I have not been tracking my distance this year.

I honestly did zero special training for the Tampa Bay Marathon Swim. In fact, I was just coming off my taper for the Colorado Masters state swim meet just the weekend before. I haven’t done any open water swimming this year as it hasn’t been warm enough in Colorado to train in open water, nor did I do any open water training at all the previous year. I might occasionally hit the weight room, but I don’t really do any sort of dryland training.

As the year progresses, I do plan to put in some more distance in the pool and do quite a bit of open water swimming to gear up for the other swims I’ve got on my schedule, but I haven’t yet figured out how I’m going to fit that in.