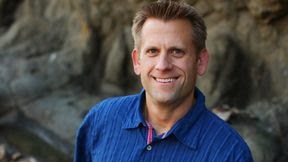 John Brenkus is one of the most effective and entertaining educators in all sports throughout the United States.

His medium is television and his artistry is an intersection of sport and science. He is an Ironman triathlete and an open water swimmer who completed the 12.6-mile Distance Swim Challenge from Manhattan Beach to Santa Monica Beach in Southern California.

John Brenkus and crew film the show inside a Los Angeles airport hangar or on location using a mobile laboratory. Each episode analyzes different sports phenomenon and explains myriad human movement using motion sensors and accelerometers. Professional athletes are featured prominently and are used to test the limits of the human body including Olympic champion breaststroker and current open water swimmer Rebecca Soni.