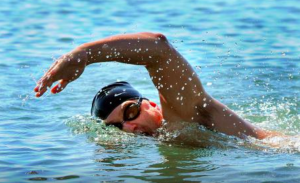 From the South Shore of Boston to the ocean cliffs of Southern California, John Donlon of Scituate, Massachusetts has 3 goals while raising money and awareness for the American Liver Foundation, both on dryland and in the water.

Donlon is a member of the board of directors of the New England Division of the American Liver Foundation and a long-time marathon runner and swimmer who has worked passionately for his preferred charity.

After a 2016 crossing of the English Channel and a recent 9 hour 20 minute quiet swim around Manhattan Island in July, Donlon completed a 16 hour 5 minute crossing of the Catalina channel to earn his Triple Crown of Open Water Swimming.   The Catalina Channel Swimming Association reported, “John battled challenging conditions in the channel with a strong westbound current, and winds of up to 9 knots for the duration of his swim.”

Donlon explains his three-fold motivation, “For me, it’s a great opportunity to do three things at once: My dad had a form of liver disease and while fortunately it didn’t impact his life too severely, it opened my eyes as to how misunderstood issues with the liver are and how underfunded liver research is.”