John Muenzer Picking Up Where He Left Off 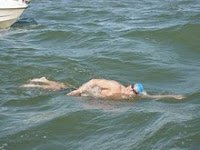 John Muenzer is on a comeback with an English Channel swim and a Tampa Bay Marathon Swim under his belt.

After training under the world-renowned Doc Counsilman at Indiana University and then breaking a world marathon swimming record in Lake Erie in 1983, he entered the work force and raised 7 kids.

Back in 1983, Muenzer broke the existing Lake Erie world record held by International Marathon Swimming Hall of Famer Dr. Harry Briggs who first set the record swimming 32 miles from Canada to Ohio in the USA in 35 hours and 55 minutes.

“I swam 36 miles in 24 hours and 12 minutes,” recalled Muenzer. “It was August 18th and 19th in 1983. The day before my swim, a father and his daughter drowned off the starting point. The Canadian government with the help of Congresswoman Marci Kaptur worked it out that they would let me do the swim if I started up farther on the Point Pelee Peninsula. I wasn’t able to do any other swims because I got married and had seven kids. So, I’m hoping to do 10-12 swims that have been in my bucket list. Time will tell.“

Well, he has two swims down.