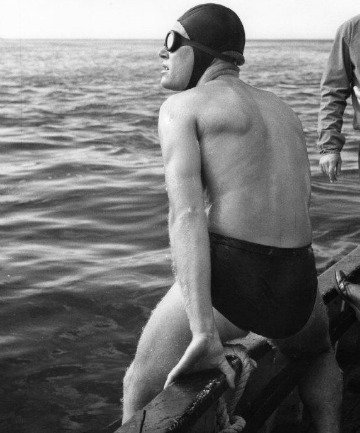 With his girlfriend in the boat urging him on and his coach slapping engine oil on his mouth, John van Leeuwen was ready to complete the first crossing of the Foxeaux Strait. With Ann, the woman who later became his wife of 50 years, and petroleum-based protection against a bloom of blue bottle jellyfish, van Leeuwen was ready to take on the rest of Foveaux Strait off the South Island of New Zealand.

50 years ago, van Leeuwen, a Dutch immigrant living in New Zealand, made the first successful crossing of the Foveaux Strait in 1963, an arduous journey that lasted 13 hours 40 minutes. He left the beach near Bluff at 9:15 am and reached Stewart Island in pitch darkness at 10:55 pm after battling the jellyfish in the middle of the strait.

“The clusters of jellyfish had their tentacles sticking to my face as I tried to swat them off.

That nearly finished me off before we finally resorted to using engine grease from the boat to keep the jellyfish at bay. I stopped and put in a complaint to the complaints department – [coach] Ivan Wilson. He got engine oil and smeared it across my mouth. That’s what saved me.
.”

His wife Ann got in the water on the last part of his swim, urging him on…and she is still at his side.

Wayne Evans, swimming in a wetsuit, commemorated van Leeuwen’s unprecedented achievement in a 50-year anniversary swim this week. He swam in the opposite direction as a solo swimmer while members of the Oreti Beach Surf Lifesaving Club crossed in a relay. I have great respect for what he achieved, especially as he wore a bathing suit and I had a wetsuit, said Evans.

Other successful swimmers of the Foveaux Strait include: