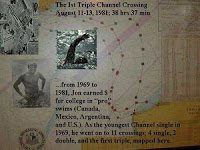 The son of the legendary Ted Erikson, the only father-son pair in the International Marathon Swimming Hall of Fame, also did many pro marathon swims in Canada, Mexico and Argentina.

3 decades after his unprecedented swim, we caught up with the intrepid adventurer and asked him to take us back to that epic swim in 1981.

Daily News of Open Water Swimming: Was the three-way crossing of the English Channel your hardest marathon swim ever?
Erikson: Yes.

Daily News of Open Water Swimming: Why?
Erikson: Because the English Channel is the open water swimming’s Mount Everest proving grounds. It is rich in history [from] Captain Webb [on] for athletes who call themselves a marathon swimmer. Like life, there are no guarantees when swimming the English Channel because of the unstable British weather, the strong tides, the cold water, the ubiquitous jellyfish and the vast amount of shipping traffic. Success of failure can occur. The 21 miles of sea between England and France are, without a doubt, the impartial judge.

Throughout my swimming career, I competed in numerous marathon swims and the obstacles I encountered in the English Channel were the toughest of all. Multiple crossings just throw more variables into the equation and make it more difficult to solve. For example, on single crossing – which is the easiest form of a channel swim – one can set the swim to take advantage of the tides and the distance swum. If a tide is missed, which is enhanced with multiple crossings, it doesn’t matter if you are Mark Spitz or Michael Phelps, you are not going to get to shore against that tide.

Daily News of Open Water Swimming: Had anyone ever considered a three-way before you did it?
Erikson: In 1965, at Dover’s Hubert House, Greta Andersen and Ted Erikson were contemplating double-crossings. Greta’s attempt preceded Ted’s and failed. Ted made the first double-crossing. In the following years, double crossings became common and the triple-crossing was presumably considered by some. However, I wanted to better the sixty-mile swims across Lake Michigan in 1963. This prompted me to tackle the 63-mile triple crossing of the English Channel.

Daily News of Open Water Swimming: What kind of pre-swim planning did you do especially before the age of GPS?
Erikson: Ted made two attempts using computer modeling of the tides at the IIT Research Institute, where he worked, and incorporated several start times and directions to take the most optimum course at his swim speeds. Their failure rested in the inability to accurately monitor in-situ channel currents and position. I believe it would be resolved with present-day technology as spring tides can aid one’s course. My swim was based on the captain’s knowledge.

Daily News of Open Water Swimming: How in the world do you train for a triple-crossing?
Erikson: That’s easy. Simply swim a lot. My training was generally quality, interval training in contrast to Ted’s strive for quantity: with the rigors of six miles kicking with a board for three days, ten miles of pulling with a leg float for five days, and twelve miles of swimming for four days, all non-stop, for his 60-mile swim from Chicago to Benton Harbor across Lake Michigan. My success was achieved at considerably less rigor.

The weather was wonderful for first and second crossings with a light wind and sunshine. At the first crossing, I hit Cape Gris Nez perfectly and, although there was some difficulty in finding a suitable rocky ledge to climb, I immediately began the return crossing. The second finish was near the Foreland Cliffs in early afternoon. Ted attempted to launch a windsurfer that was aboard to take me in, but wind was too light to maneuver. I was then accompanied in with the Zodiac. All seemed a ‘go’ for the third leg. But, the wind picked up a bit and darkness descended as we approached shore. And I just missed it. The spring tide carried us miles to the east. This was the most difficult part for the crew, but I thought, “After all this, I am not quitting now! I’m good to go.”

The shore of France near Calais on a nice sandy beach was the final destination. On the journey back to England, attempts to warm me up were difficult. I shivered most of the way. Rosie George, the official Channel Swimming Association observer and my dad were happy, but concerned. The champagne at the Dover dock was a nice touch for the crew, but I wanted only a warm bed and broth.

Daily News of Open Water Swimming: How did you feel when it was over?
Erikson: When I finished, I felt tremendous. My dream of accomplishing a major athletic challenge, something that had never been done before by another human being, made the culmination of all my years of my swimming – since the age of 5 – worthwhile and uniquely meaningful.

To accomplish a goal of this scope, I believe that one must have a mentor. That is, someone who has inspired you to follow your dreams – to truly reach beyond your grasp. For me, that person was, and still is, my dad, Ted Erikson, one of the greatest marathon swimmers to ever pass through the water and an even greater dad!

I’m extremely proud of this first three-way crossing of the English Channel because it is a record that cannot ever, and will not ever, be broken because like Roger Bannister’s [first] sub-4 minute mile run, there is only one first. [Roger] was the pioneer and inspired others by giving them the confidence that this goal is humanly achievable. I trust that as my Dad has inspired me, my three-way channel swim has done the same, inspiring other swimmers and instilling in them the self-assurance that their goals can be reached.

Daily News of Open Water Swimming: What did you eat right after you finished?
Erikson I didn’t eat right after the swim. The most important aspect then is to get into a warm bath and thaw out. When I did eat, it was skinless roasted chicken, small portions because after feeding, every 45 minutes to 1 hour for the last 38 hours, on liquid foods (Nutrament, tea, coffee and soups all mixed with 400 calories of glucose), you don’t want to shock your GI-tract.

Daily News of Open Water Swimming: What advice do you have for anyone who is doing a single-crossing of the English Channel?
Erikson: If you can swim ten miles non-stop at a steady pace, you will have a better than 50% chance of a single English channel crossing. Double this for a double crossing and triple this for a triple. It must always be understood that the remaining [percentage of success] is dependent on the weather, the start time, your captain and crew, your handlers and the other obstacles that you encounter: jellyfish, freighters, darkness, storms, etc. You have to be prepared to pay your nickel and take your chances.

Daily News of Open Water Swimming [to Ted Erikson who was on Jon’s escort boat]: Any other comments on the triple crossing?
Ted Erikson: Jon was very proud to receive a Rolex watch for the fastest single crossing on August 19th 1979 on his way to a double crossing. It bettered John Kinsella’s [crossing who was] in the water at the same time, going for a single. Needless to say, I have been impressed and humbled by my son’s achievements.

Other articles about Jon Erikson are here: