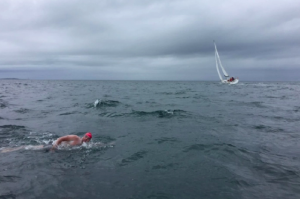 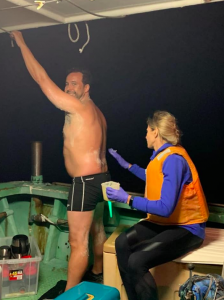 It was a family affair to say the least.

46-year-old father said, “I have 5 children ages 10, 17, 19 and 25. Each of them crewed individually alongside my wife Julia on different swims. Julia crewed all 7 swims with other members as young as 10 accompanying in tough weather crossings .”

After completing the English Channel, North Channel and Molokai Channel, Ratcliffe went on a global tear and completed the Strait of Gibraltar, Tsugaru Channel, Catalina Channel and Cook Strait within 8 months – each crossing successful the first time. “I am not sure I would have liked to have retried any of them!”

The last crossing was a massively difficult crossing of the 23 km Cook Strait in New Zealand, completed on December 10th.

Ratcliffe was obviously focused and determined for the wind speed in days leading up to his swim was up to 140 kph in Wellington. “On the day of the crossing, the wind speeds were circa 15-20 kph at the highest – and the swells were still present as an overhang from unsettled weather on the days before.”

In an interview with The Peterborough Telegraph after his success in becoming the 19th person in history to complete the Oceans Seven, Ratcliffe described the conditions, “After waiting for seven days in Wellington for a swim window before my tidal slot expired on December 10th, we finally set off in big swell from the most southerly tip of the North Island, heading across the Cook Strait to the most northerly tip of the South Island.”

In the 16°C water that occasionally dipped down to 13-14°C en route to South Island, he just put his head down and swam.

After four hours, things started to calm down a bit before the end came around and he faced his final challenge. As he explained, “The swim settled down after four hours, with rolling seas abating for a while until nearing the finish as the tide turned and we had to crab against wind and waves to hold our heading in order to try and make land before dusk.

It was only eight hour in, with about three to go that reading the tides became a challenge and the race to beat the notorious whirlpools and currents on this stretch of water began.

From there is was a bit of a grueling battle to make land under the steep cliffs of the South Island of New Zealand in sloppy and challenging seas.”

But he got in and got the job done – with wife Julia at his side: the Oceans Seven: