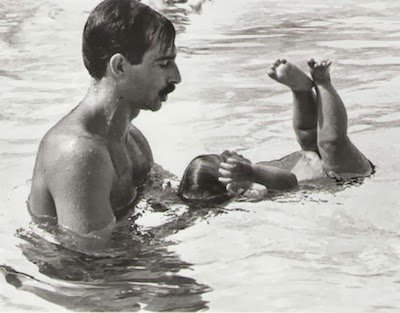 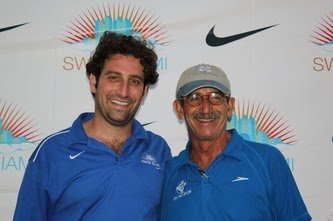 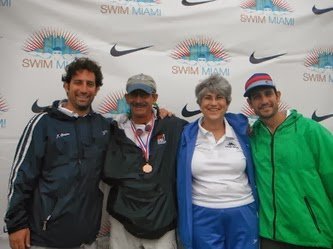 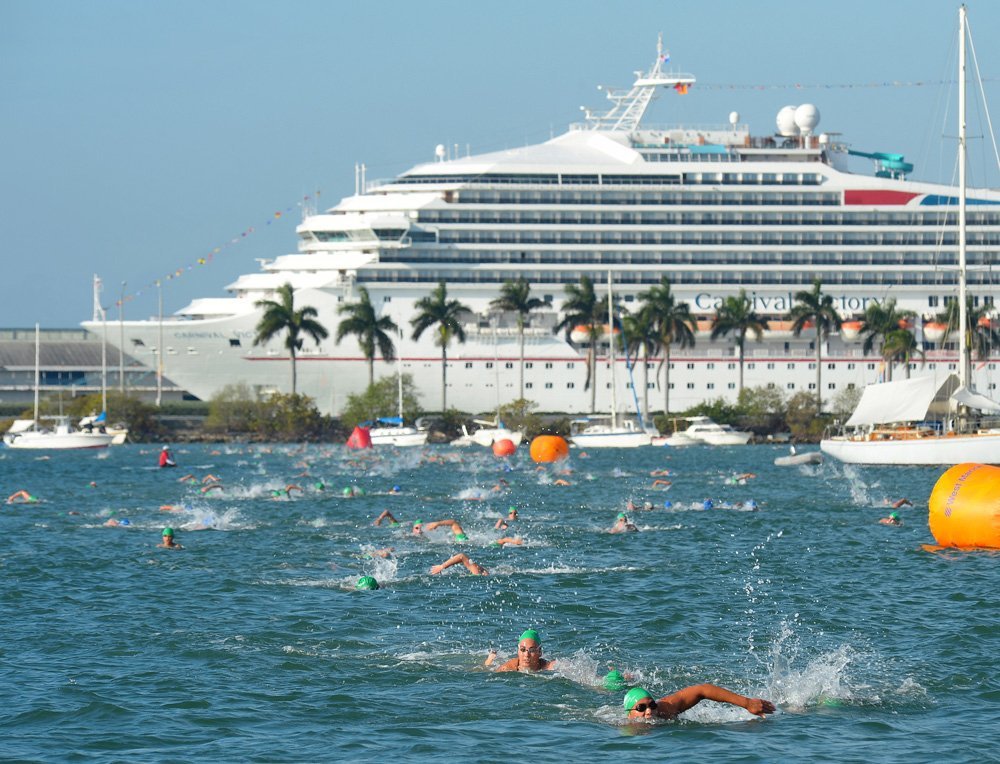 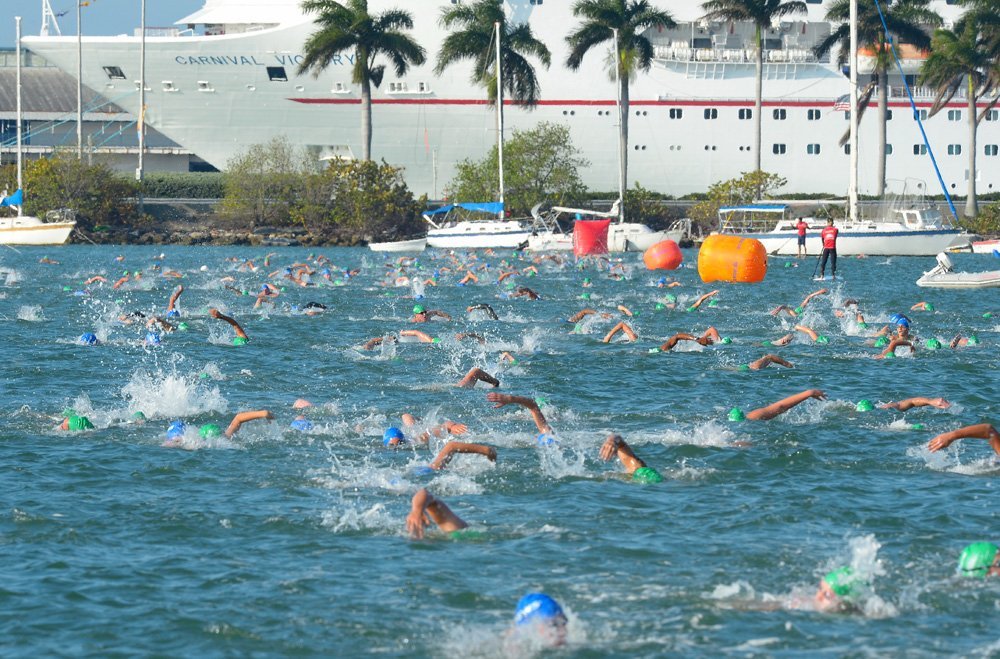 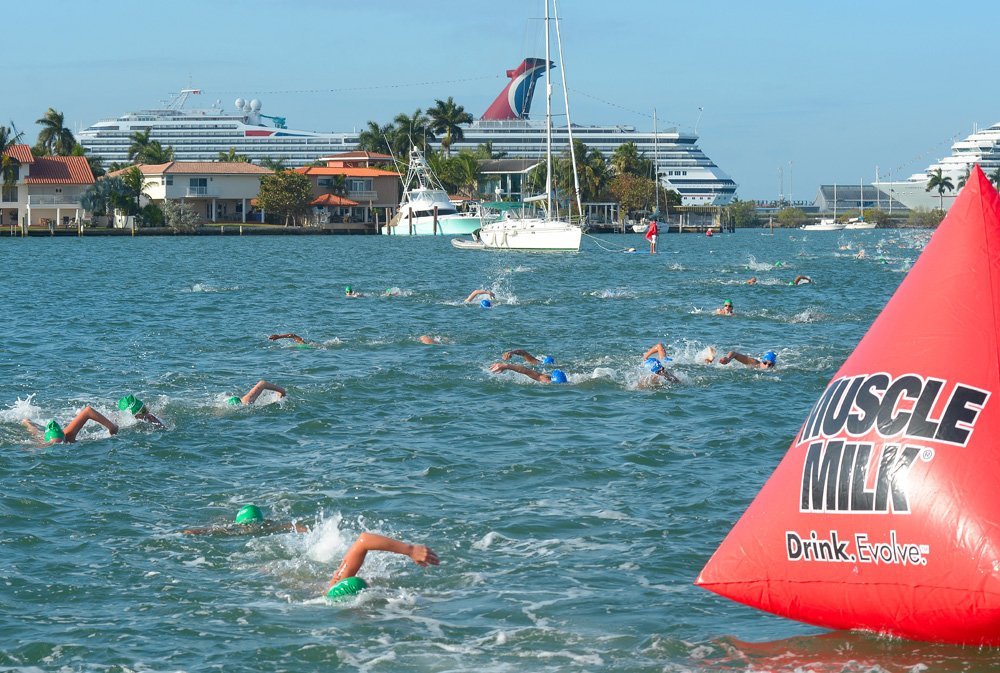 Jonathan Strauss added another marathon swim to his sports event portfolio this weekend: the 8-mile Alligator Reef Lighthouse Swim in Islamorada in the Florida Keys.

In addition to his distance skateboarding and paddle boarding events, Strauss organizes the annual Swim Miami in April.

Although Swim Miami was started by Jim Woodman, Strauss and his father, Robert, helped out early on. Now, Jonathan is carrying on the efforts of Woodman and his father. We asked Jonathan to fill in a bit of history on being a second-generation open water swimming race director.

Jonathan Strauss: My father began working with Jim Woodman in 1989 on the original versions of Swim Miami and the Miami Mile that actually swam down the Miami River and into Bayside. I actually swam that race. Looking back, I can’t believe I swam in that water, but that is what open water swimming is about. No matter what the conditions, every athlete wants to accomplish it and live to tell the story.

Daily News of Open Water Swimming: What is your swimming background?

Jonathan Strauss: I graduated high school from Ransom Everglades, won a Florida state championship in water polo, and was named first team All-American in water polo. But I decided to swim in college for Coach Gregg Troy at the University of Florida. Coach Troy gave me the amazing opportunity to walk-on at Florida where I later became more involved with the team as its Captain in my junior and senior seasons. I never made it to the NCAA’s, but my passion for aquatics and my selection to the Colombian National Team for international swim events kept me hungry. At Florida, I majored in Sport Management and always thought I would become the next Jerry Maguire. An Ethics/Sports Agent class in the middle of my Junior Year disenchanted me from becoming an agent, and I started to look into what my plan with Sports would be. I decided at that point that I wanted to own the property and negotiate with athletes, rather than represent (babysit) athletes and stray away from my moral/ethical code. I figured that rather than getting a job, it would be best to create something and run with it. I had no risk at that point, since I still wanted to study and get a Masters Degree.

Daily News of Open Water Swimming: When did you begin helping out with open water events together with your father?

Jonathan Strauss: 1997 was the last year that Jim Woodman lived in South Florida and the last year that my father helped out and hosted the Miami Mile in the Miami Marine Stadium Basin. Jim went on to found Active.com and my father continued to operate a swim school and aquatic sports camp business until 2005. When I got more involved beginning in 2005, my network was in aquatics, so I decided to recreate the Miami Mile and rebrand it as Swim Miami. I knew I could convince some of my friends who were famous stars in the swimming world to join me at the first edition of the rebirth of Swim Miami in 2005 after my career in competitive swimming was over. Ed Moses, Gary Hall Jr. and Anthony Ervin were amongst the first competitors at the rebirth of the event. We also catered to the triathlon world by offering a more challenging 5K swim as well.

Daily News of Open Water Swimming: What do you see as the future of open water swimming, in Florida and around the United States?

Jonathan Strauss: If thousands run marathons and compete in triathlons, thousands should swim open water. It creates the same sense of accomplishment, if not better, and releases the same amount of endorphins, not to mention the low impact and longevity of career that exists.

The thrill of accomplishment well outweighs the fear or chance of fauna affecting your participation. Florida is a great destination for open water because it can be practiced year round.

We have different venues that lend to the different elements that make open water challenging: we have extremely hot water in the summer time, we have rivers, lakes, rough water, and calm water. You have to know how to swim in all of these in order to be recognized as a top open water swimmer. I would like to see the Olympics develop that in their format, in order to truly find who the best open water athlete is. Unlike swimming in a pool, open water is more about accomplishment rather than time. It is competitive because you want to get to Point B faster than your friends, but the time doesn’t matter as the conditions are equal to everyone.

Daily News of Open Water Swimming: Do you see any differences between the expectations of swimmers of different age groups?

Jonathan Strauss: I don’t see many differences in age groups. Everyone wants to win their age group. The older age groups want that sense of accomplishment a lot more than just the award of being third place. But I notice that they all like to know what place they got. I know that older generations like to get more and more gadgets to help them swim so that they can try and travel at equal speeds as to when they were younger. Fins, paddles, pull buoys, and even snorkels are consistent questions from older swimmers, whether they will be allowed or not at the race. I think that this will make participation grow. I have started to allow gadgets at all the swims that I produce.

Daily News of Open Water Swimming: Are there any differences in expectations or racing between males and females at the Swim Miami event?

Jonathan Strauss: Men want to beat all the men and women want to beat all the women. The more competitive women tend to not want any other swimmers to beat them. I have seen that the male field at Swim Miami does tend to be more competitive. But I know that women brought less recognized sports such as beach volleyball and tennis to prominence so I love to see when more and more women compete.

Daily News of Open Water Swimming: What is your lightening policy in Miami?

Jonathan Strauss: We always hire Ocean Rescue Guards at our swim and we designate a Head Lifeguard. Our policy is in line with the comfort level of the Head Lifeguard. We absolutely ask to remove all swimmers from the water if there is a 12 count or less from lightning to thunder. We will wait out at least 30 minutes from the last sound of thunder. If we get into a delay of longer than 2 hours, we will call the event and reschedule. Safety is a priority of mine, and that is why we do have a weather policy, even though the water is so dense and the chances of lightning striking are very slim, but I do not want to be the first recording of an event that has Lightning strike. I know the swimmers are diehards and do not want an event cancelled, but we need those rules. I personally, used to joke when I was a swimmer, “If the fish don’t jump out of the water, why should we?” Just a thought.

Daily News of Open Water Swimming: Have you ever heard of anyone who has ever been struck by lightening in the water?

Jonathan Strauss: I’ve never heard it. I googled it, and there are no recordings of lightning strikes in water in the State of Florida. I am willing to bet it is like that nationwide, and perhaps worldwide, but it is better to not try and find out. That is why safety is absolutely necessary. As an event producer, cutting costs are important, but I would rather take a paycut than compromise safety of the participants.

Daily News of Open Water Swimming: What role does your mother play in all of this swimming and event producing by you and your father?

Jonathan Strauss: My mother is the number one cheerleader and the best Registration/Check-in “Employee” anyone can ask for. She now gets a lot of help from my wife, my brother, and his wife, but there is nobody as tireless as her. She will even travel to make sure that there is someone responsible at the Check-in area.