Photo below taken at 1:06:44 into the video above courtesy of USA Swimming at Castaic Lake, Southern California.

OWS 6.3.1 If in the Opinion of the Chief Referee or Referees, any swimmer, or swimmer’s approved representative, or escort safety craft, takes advantage by committing any violation of the rules or by making intentional contact with any swimmer, the following proceeding shall apply:

1st Infringement: A yellow flag and a card bearing the swimmer’s number shall be raised to indicate and to inform the swimmer that he is in violation of the Rules.

2nd Infringement: A red flag and a card bearing the swimmer’s number shall be raised by the Referee (OWS 3.6) to indicate and to inform the swimmer that he is for the second time in violation of the Rules. The swimmer shall be disqualified. He must leave the water immediately and be placed in an escort craft, and take no further part in the race.

OWS 6.3.2 If in the opinion of a Referee, an action of a swimmer or an escort safety craft, or a swimmer’s approved representative is deemed to be ‘unsporting’ the referee shall disqualify the swimmer concerned immediately.

“Rules OWS OWS 6.3.1 and 6.3.2 are required because once an athlete is disqualified, he or she can impact the remainder of the race,” described Steven Munatones who was on the course on the lead boat during the USA Swimming National Open Water Swimming Championships in Castaic Lake in Southern California.

“This is why when Jack Burnell turned over on his back, brought his knee up to his stomach, then purposefully took aim to kick Andrew Gemmell, and then nailed his opponent with the sole of his foot in clear view within proximity to officials’ boat, the referees had no other option but to give him a red flag and immediately disqualify him on the last loop.

While Burnell seemed to complain that Andrew was touching his feet as Andrew was drafting during the last loop, it was a flagrant act of unsportsmanlike conduct to turn over, cock his leg and kick an opponent aiming at his head.

But what was most disappointing was when Burnell was informed of his disqualification, he clearly ignored the repeated directions of the head referee and the rest of the officials on the lead boat to leave the course.

He had two officials waving red flags at him from the officials boat. They were repeatedly blowing whistles at him with hand directions and shouts to remove himself from the course, but he defiantly stared at the referees [see photo below as Burnell in black cap looks up at head referee] and chose to keep swimming, impacting the rest of the race for the other competitors.”

“It is unfortunate that there are no repercussions in the existing rules for such blatant and willful act of defiance of well-established and well-known rules of the sport. Imagine an athlete in another sport who repeatedly looks at a referee and ignores directions for him or her to remove himself from the field of play. Worse yet, they continue on to the finish, impacting the other athletes in the competition.

The sport – under the leadership of FINA – should enact rules that define specific repercussions for such direct and shameless defiance of the rules and the directions of the officials in charge of the race who are responsible for interpreting and adjudicating the rules.”

Despite the kick that effectively took Gemmell out of the race, Burnell and the rest of the field simply could not catch Jordan Wilimovsky of Team Santa Monica who dominated the race from the moment he moved into the lead with less than two loops to go and ended up winning by nearly one minute.

No one was going to catch Jordan today. Once he gets out into the open with no one around him, especially with the conditions like today, it is difficult to stay up with him … and nearly impossible to run him down. The reigning 23-year-old FINA world 10 km champion (at Kazan, Russia in 2015) very much looks like the prohibitive favorite going into the 2017 FINA World Championships in Lake Balaton, Hungary.

While the pre-race discussions centered around the possibility of wearing wetsuits for the first time in a major domestic competition, the Southern California weather warmed up the water to 69°F, just over the 20°C threshold for wetsuits according to FINA’s newest open water rules. 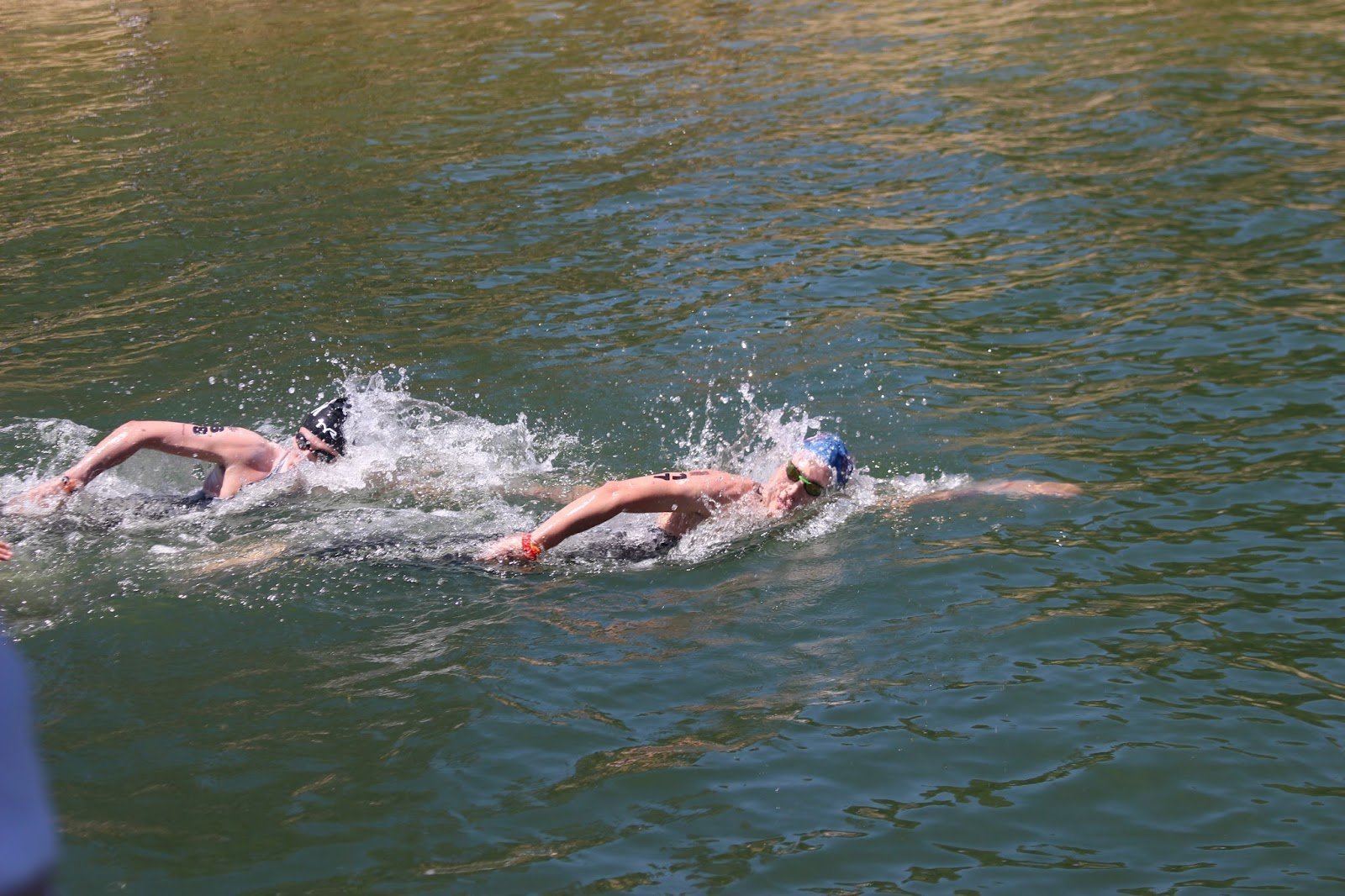 Jordan Wilimovsky pulling into the lead over Jack Burnell on loop 5 of 6. 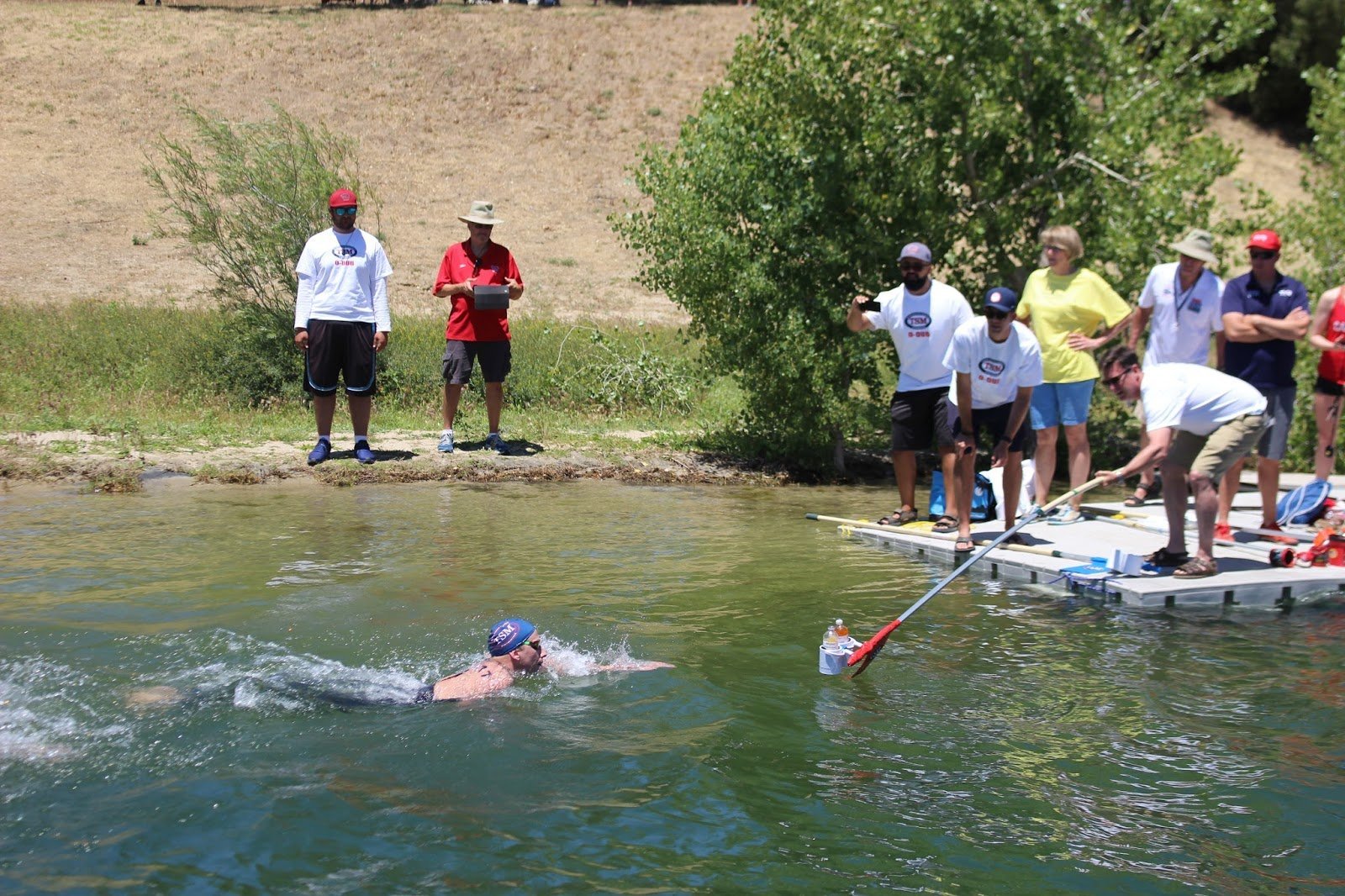 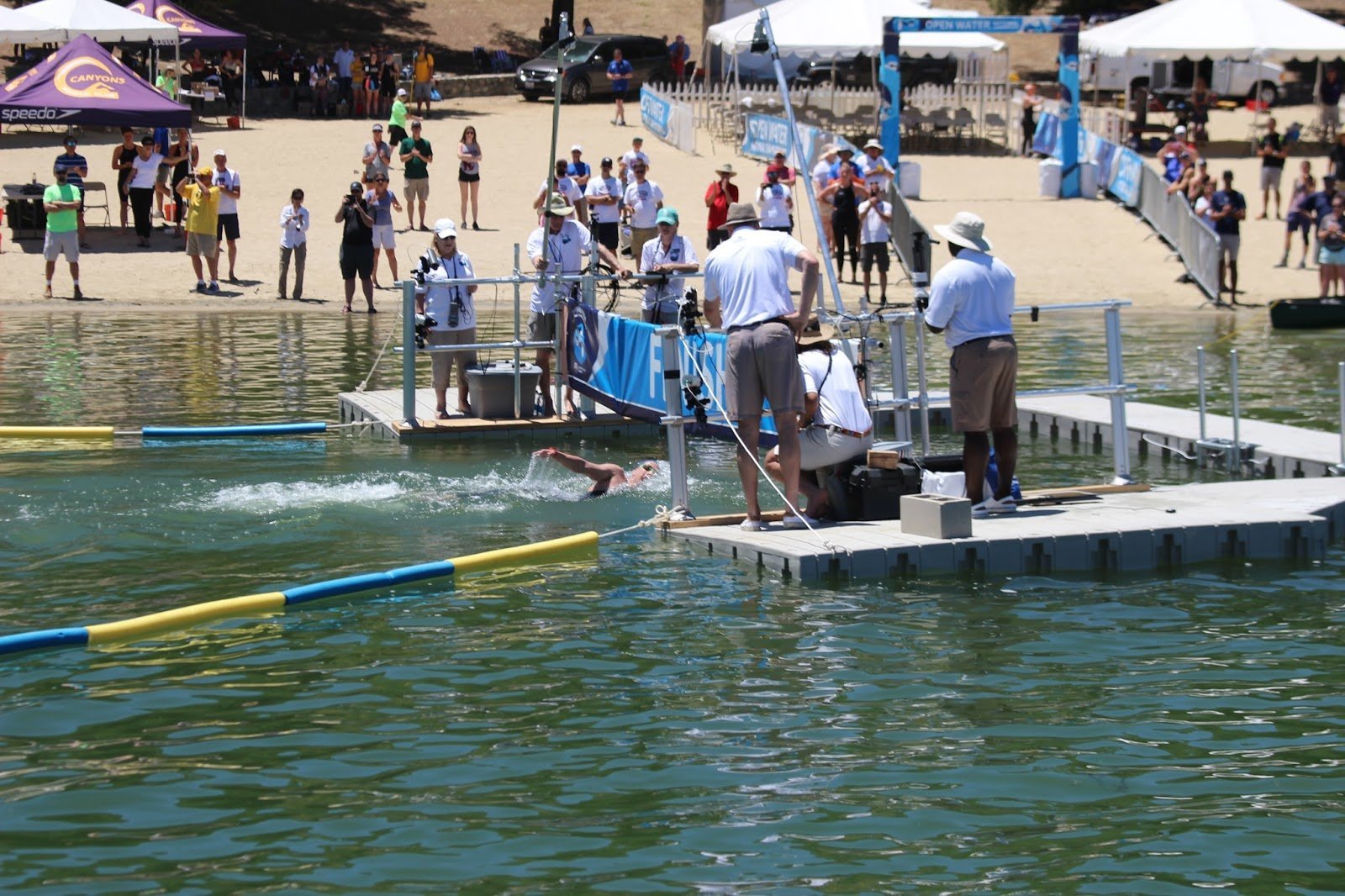 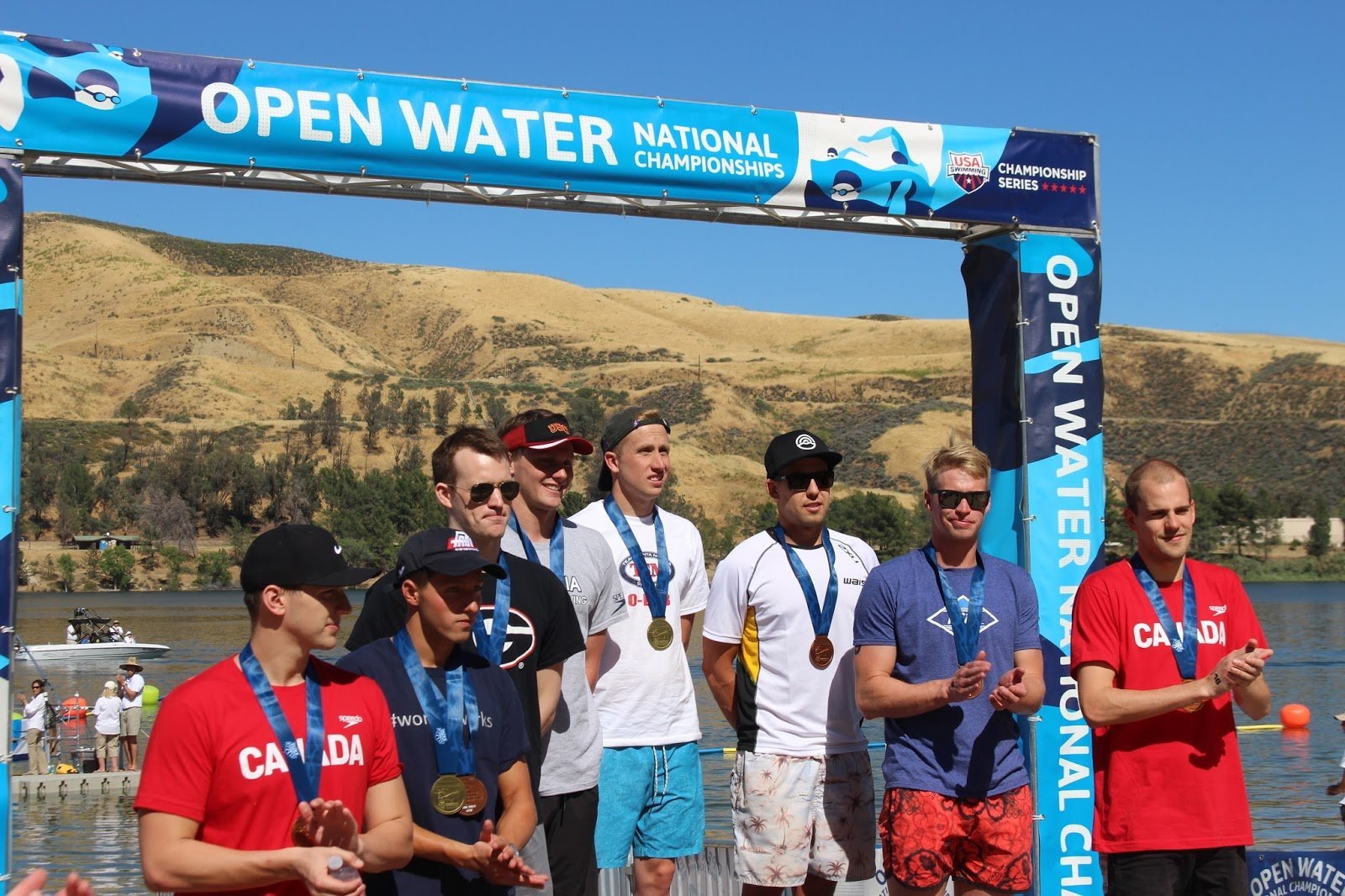 Wilimovsky explained his perspective at the awards ceremony, “It was a fun race. It was a little cold at the beginning, but I just tried to stay relaxed and swim within the pack the first couple of laps and then build into it and be quick the last two laps and into the finish. I was confident in my pace and that I would be able to finish pretty strong and pull away at the end.”

At 1 hour 39 minutes into the video above, Burnell can be seen looking up at the referee for Gemmell’s drafting off of him, apparently because Gemmell was touching his feet in the draft. Burnell turns up his kick to ward Gemmell off of him. This physicality continues for the next few minutes. The confrontation finally escalates at 1 hour 42 minutes and 55 seconds into the swim when Burnell finally turns around and takes an aim with his foot to the head of Gemmell. For this act of unsportsmanlike conduct, he is immediately red carded and is repeatedly asked to leave the venue which he ignores for the entirety of the race. Whistles can be heard as the head referee and assistant referees on the boat wave red flags, point to him, yell at him, and write his race number on the whiteboard to indicate that he must leave the course.

Because Great Britain used this competition as its 2017 FINA World Swimming Championships qualification race, Caleb Hughes will get the nod because he just barely touched out teammate Toby Robinson 1:58:59.63 to 1:59:02.10. A second swimmer can be named at the discretion of the Great British delegation. So it will be interesting to see if Burnell, who is undoubtedly his country’s best open water swimmer will be selected even after his blatant disregard and disrespect for the rules of the sport and its officials. His complaints after his disqualification at the 2016 Rio Olympics were widely covered by the media, but it will be telling how his actions will be dealt with after his race.