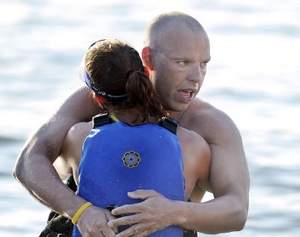 Josh Heynes is a certified exercise physiologist and marathon swimmer who has swum across Lake Erie twice (2006 in 11:53:36 and 2011 in 11:16:40). He is the world record holder of the 24.3-mile course with his 11 hours 16 minute charity swim from Long Point, Ontario, Canada to North East Township’s Freeport Beach.

“This was a lot tougher than the first time. I was taking in too much water, and my stomach couldn’t handle it. More cramping came in, but we fought through it, and my team kept pushing me. I got real sick six miles in, and I didn’t think I was going to make it, and around mile nine, I was ready to call it quits, but the team stuck through and pushed me along.

We got better and hung in there and kept pushing and pushing. It’s not just for me, it’s their record, too. Without those guys pushing me as hard as they did, I probably wouldn’t be here right now.” said Heynes referring to his five escort kayakers.

Heynes said he spent 10 months and more than 2,400 hours training for the swim that raised money for the John Kanzius Cancer Research Foundation. His training included more than 1,000 miles of swimming in both a 25-yard pool and open water.

Photo by Janet B. Campbell of the Erie Times-News.