Julia Galan And Noah Martin On The Ocean Games 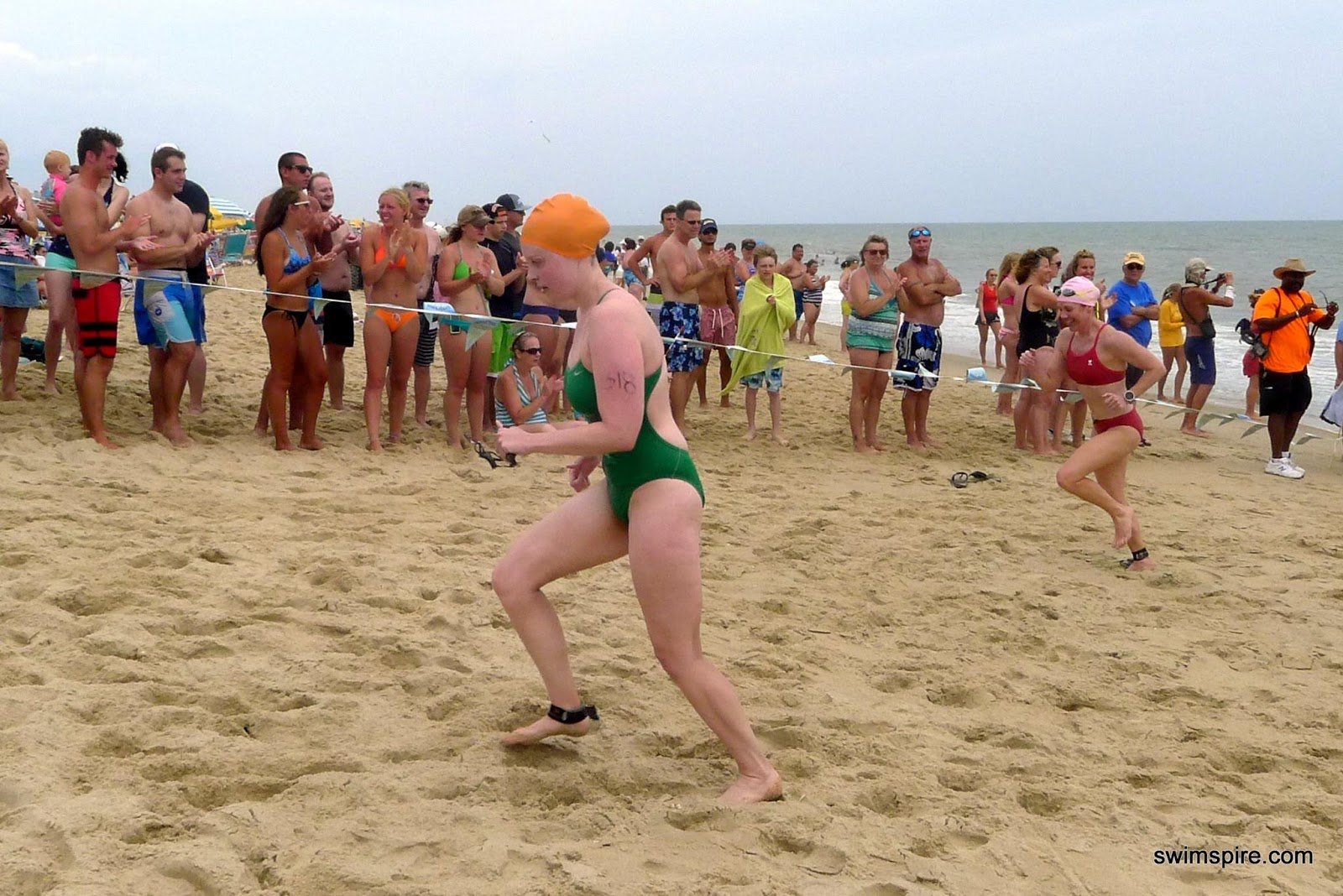 Ocean Games’ mission is to raise funds for the Johns Hopkins Brain and Stroke Rehabilitation Program, while increasing awareness of brain injuries and recovery and promoting the positive effects that sports have on the mind and the body. Julia Galan is part of the organization and won the 3-mile race in 1:13:32 while the men’s 3-mile race was won by the Naval Academy’s Noah Martin in 1:01:12. We asked them about their impressions of the race.

Daily News of Open Water Swimming: You are part of the organizing team for the race, yet you won your own race. How busy were you on race day?
Julia Galan: Corey Davis is the race directors and founder of this event. I’m the marketing manager and swim clinic coach for the Ocean Games team via my swim news and coaching site, Swimspire. In addition to developing and managing the marketing strategy for the event and running stroke technique clinics on behalf of Ocean Games during the course of the year, I also publish a pre- and post-race article for the event and draft the press releases. I wanted to capture as many memories of the day as I could for the post-race photo gallery and article. Although this resulted in my morning being a lot busier than expected, I was able to get to the race start in time and catch a few moments to focus before the 3-mile began.

Daily News of Open Water Swimming: Did you have time to warm-up properly given your race responsibilities?
Julia Galan: I did not have too much time to warm up before the event, so I used the first 1/2 mile for warmup before increasing my speed and really beginning to race.

Daily News of Open Water Swimming: The army of volunteers was very impressive. How did you recruit so many volunteers?
Julia Galan: The Ocean City, Maryland area is a very giving and very close-knit community. Everyone knows Corey and the team personally. So many were inspired by Corey, the cause and the event that they volunteered on their own and reached out to see how they could be part of this special day. Denise Donahue, who also happens to be Corey’s sister, is our volunteer manager. She did a wonderful job organizing and recruiting the volunteers to ensure a safe and fun event for all. The race could not happen without this level of support from the community, family and friends and for that, our entire team is grateful.

Daily News of Open Water Swimming: The Ocean Games is an impressive title. What are some plans for the future of this event?
Julia Galan: The Ocean Games provides full open water experience for all levels of athletes, from novices to elites. On the swim side, we are one of the only open water events on the East Coast of the United States to offer an ocean-based marathon race. The SUP CUP is also one of the only ocean paddleboard events of its kind along the East Coast. In terms of future plans, we hope to continue to grow in size, attract all manner of athletes from all kinds of water sports to the town of Ocean City and to further our mission, which is to provide the ultimate ocean experience while raising funds and awareness for traumatic brain injury research.

Daily News of Open Water Swimming: Do you plan to franchise or license this race concept to other event directors around the U.S.?
Julia Galan: Anything is possible. For the moment, we would like to continue to allow our event to grow in number and in diversity, and keep it as a unique race. We’ll then see what the future has in store.

Daily News of Open Water Swimming: Tell us about your race: did you go out hard or negative split? Did you draft or try to hang with the men? Were you happy with your strategy and race tactics?
Julia Galan: I used the first 1/2 mile as a warmup and then picked up the speed, staying at a steady pace until the 2-mile mark. Once I passed the 2-mile buoy, I went more into race mode. We were fortunate to have a strong current pushing us the north, although this was accompanied by some chop and a larger swell. In the end, the advantages outweighed the disadvantages. I did not have too many swimmers around me during the race so it was difficult to judge where I was in terms of placement. In the end I placed 5th overall and 1st in the women’s division so I was very pleased with how I swam. If all goes well I hope to swim the 9-mile next year and am already looking forward to it.

Daily News of Open Water Swimming: How did you find the time to compete in the Ocean Games during your busy summer? Don’t you have obligations during the summer?
Noah Martin: All [Naval Academy] midshipmen are required to participate in professional development training over the summer. This training ranges from going on a ship for a month, to visiting bases, training in their respective sports and down time with family. The length of the training evolution is not always set in stone. The reason I was able to compete in the Ocean Games was because I was released from my training a few days early. I had those few days to do whatever I chose to do and I just happened to be in Ocean City at the time and decided to compete in the race.

Daily News of Open Water Swimming: When one thinks of a Navy midshipman, certainly ocean swimming is a skill that is assumed. But how many midshipmen do you think have actually participated in a competitive ocean swim?
Noah Martin: Honestly, very few. I would consider my case unique because I am a varsity swimmer for the Naval Academy. Midshipmen enter the Naval Academy with varying levels of swimming ability, swimming is a mandatory class so all midshipmen will leave with the ability to swim. I would assume that the few midshipmen that participate in Open Water racing are either part of the triathlon team or swim teams. Ocean swimming is not part of the curriculum