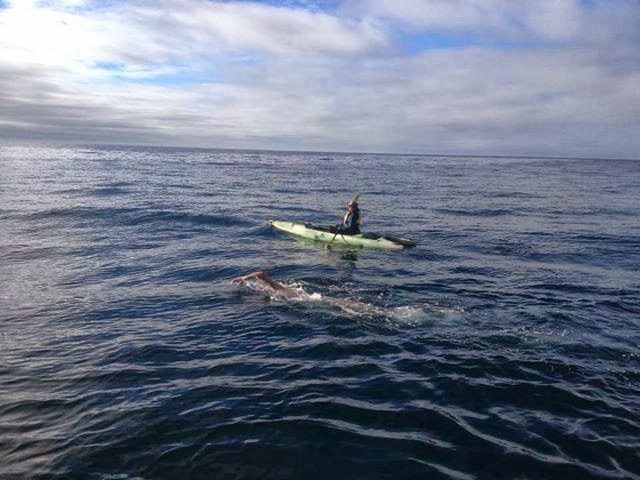 2 hours 25 minutes after pushing off San Miguel Island, he reached Santa Rosa to the barks of hundreds of elephant seals and sea lions. Marine life, abundant and visible at the start and finish, were his friends today as a whale breached 200 yards from his escort boat after he finished. Rusinek was frustrated by several dashed starts due to unswimmable conditions in the previous weeks.

But the wait proved fortuitous. This morning, Rusinek was pleased to find flat calmness greet him at the start. With the water at 57.9ºF (14.4ºC) on the San Miguel side, it warmed up slightly to 60.5ºF (15.8ºC) by the time he reached Santa Rosa.

Observer Scott Zornig observed his swimming buddy’s 3.6-mile effort, “He held 63 strokes per minute throughout the swim. It takes nerve to swim that body of water. It feels ominous out there. I would venture to say that few would be willing to cross that body of water.”

Certainly true. It was a 7-hour boat ride to the island and a 5-hour ride back with one unprecedented swim between.