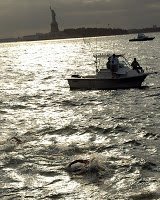 Sarah Wassner Flynn wrote a flattering article in Competitor Magazine about the NYC Pro Swim. In the article titled, Jumping Right In, Sarah talks about the only FINA World Cup race in America that featured 42 elite swimmers racing four loops in New York Harbor right across the the Statue of Liberty and Manhattan Island.

Morty Berger, founder of NYC Swim was quoted by Sarah, “People will travel from around the world to do our events. New York has the exposure, the media and sponsorship opportunities.”

NYC Swim will hold its NYC Pro Swim once again this year on August 1 – a day after the 32K Traversée internationale du lac St-Jean hoping to attract a similarly international and elite field as it did in 2009 where both the men’s and women’s races came down to exciting finishes when FINA World Cup champions Thomas Lurz and Poliana Okimoto took the NYC open water crowns.

Sarah is the Regional Editor of Competitor Magazine that annually has a very interesting set of articles on open water swimming in its July issue.