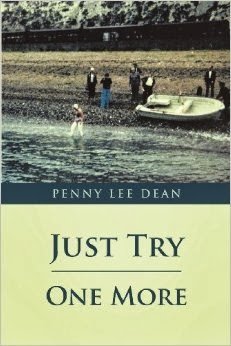 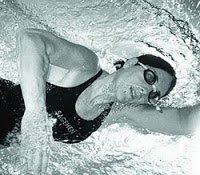 Her 196-page softback entitled “Just Try One More” is a page-turner for all those interested in open water swimming and learning how a tiny, young girl from California became one of history’s greatest channel swimmers.

“I am very happy about the book,” explains the first USA Swimming national open water swim team coach who founded the Catalina Channel Swimming Federation and coached an entire generation of open water swimmers. “It tells the story about my life of swimming and the relationships that I had with my mother and all my coaches including Siga [Rose]. It was a fun project to work on“.

She talks about her new book:

Daily News of Open Water Swimming: What chapter was your favorite to write?
Penny Lee Dean: My favorite chapter was Is That The Coast as it came together finally.

Daily News of Open Water Swimming: Other than family, coaches or teammates, what individual in your autobiography was the most colorful character you met?
Penny Lee Dean: Dale Petranech, by far. He was so funny and always did something outrageous.


Daily News of Open Water Swimming: Was there anything funny or interesting or memorable that you did NOT include in your book?
Penny Lee Dean: Stories of my brother when we lived together. While in Windermere one year, Dale Petranech and Isabel had as the official [car] and he had his own car. He left ten minutes in front of us as we needed a large van for four swimmers and coaches. As we were about to leave, Dale returned and asked for a new car. I asked what happened and he made a few of his funny noises. Then said while he was on the left side of the road, he knew he had to turn right on the next road. But he turned too soon and landed his car on one of the crosswalk islands and all four tires popped. I laughed so hard. This was Dale. He took it in stride and rented another car.

Daily News of Open Water Swimming: When we think of great channel swimmers, women immediately come to mind. Gertrude Ederle, Greta Andersen, Lynne Cox, and you. What common characteristics do you think tie these women together?
Penny Lee Dean: And Florence Chadwick. Desire, planning, and the will to be the best overall for both men and women; the fight to conquer the conditions no matter what they are, especially water temperature. Humor and seriousness when needed. They are all explorers as they each tried to do something new and different.

Daily News of Open Water Swimming: Take us through the preparation and execution of your 36,000 meter training swim for your channel swims. Did you stop? Did you hydrate?
Penny Lee Dean: I tapered four days for the swim. I drank ERG every 10,000 meters. I didn’t touch the bottom. My 100m splits were put on a board so I could read and figure out my 500 and 1000 and 1500 times in my head.

Daily News of Open Water Swimming: You taught for many years at Pomona-Pitzer College. How did you greet your students on the first day of class? What primary life lessons did you want to teach your students?
Penny Lee Dean: I taught at Pomona-Pitzer for 26 years. I gave the students a syllabus on the first day and then I would go over it. I would ask names, backgound and have a swim test except in the beginning. I would go one at a time, especially for foreign swimmers because many were non-swimmers. For the beginners, I made them get in the water at the 7-foot depth, but we had a ledge and they would hold on. They would move a few steps and then get out. Next, I would take them to the outdoor showers and have them put their faces in the water. They had homework to do this a few times before the next class. Most beginners were afraid of this. By the end of the semester, they were usually swimming a half-mile. On the last day, they played water polo in the 15-foot water.

My classes were for them to learn to believe in themselves and to challenge themselves. It was also a place they could talk about school. I told them it was their responsibility to change anything they didn’t like first at the school and then in the world. Many did lots of changes over my 26 years.

The book describes Dean’s training and development to accomplish something no one had ever done before or has accomplished since: simultaneously hold the English Channel and Catalina Channel records.

Just Try One More is a great read from one of the icon’s of the open water swimming world who has given much to the sport as an athlete, coach, author and administrator.

Just Try One More is Dean’s fourth book following Open Water Swimming: A Complete Guide for Distance Swimmers and Triathletes (1998), How To Swim A Marathon (1985) and History of Catalina Swims (1980).