Ka’ena To Kauai With Kozlovich

Penny Palfrey gave a fascinating interview to Hawaiian adventure trainer Jeff Kozlovich about her 72-mile (115.8 km) solo swim across the Kaieiewaho Channel between the islands of Oahu and Kauai.

With plans for a late April window, Palfrey will take off when the conditions warrant.

The article [see here] where Palfrey divulges where she will start (Ka’ena Point) and who will be on her escort boat (Forest Nelson, Bill Goding, Neil Vaughan, Kozlovich and, possibly, her husband, Chris). It is quite an entertaining and enlightening interview. 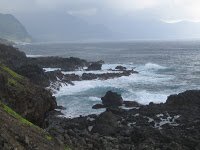 Palfrey will certainly be jumping off into history as she will be the second person – after Jonathan Ezer in 1974 – to attempt this swim of epic proportions.

During the winter months, Kaʻena Point is pounded by waves up to 49 feet (15 meters) with reports of waves with 60–80 foot (18–24 meter) faces with dangerous rip currents and other hazardous ocean conditions.

But one of the world’s greatest living adventurers will be in excellent hands.

More photos of Ka’ena Point can be seen here.