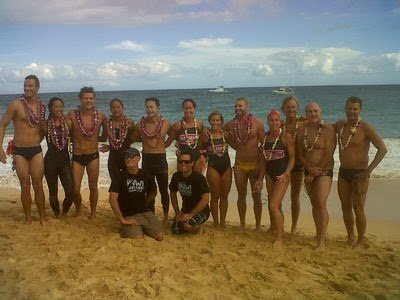 The inaugural Ka’iwi Channel Swim was arguably the most risky relay competitions in recent memory.

The 28-mile crossing in August 2013 between Molokai Island and Oahu was not only conducted safely, but the race between The Youngsters and The Veterans was neck-and-neck for nearly 10 hours with numerous lead changes.

So much could have gone wrong in the race, but everything went right under the leadership of race directors Jeff Kozlovich and Steve Haumschild.

The Molokai Channel is considered one of the most difficult channel crossings in all of open waterdom, located in the middle of the Pacific Ocean where massive currents, waves, winds and marine life can bar swimmers from success. It has been crossed successfully by 28 people including some of the most hardened swimmers in the world. But a cursory review of their Molokai Channel times compared with their English Channel crossing gives an indication how tough the mid-ocean crossing can be:

The Ka’iwi Channel Swim is a 28-mile, open ocean, island-to-island team race described as ‘the most insane open water swim event on the planet.’ We agree because the water between Oahu and Molokai can get REAL BIG, REAL FAST.

“This is ultimate proving ground,” chimes in both Kozlovich and Haumschild. “Increased dangers of this event exist beyond typical ocean swim events including rapidly changing weather conditions, and absolute remoteness where assistance or rescue is NOT guaranteed and should not be depended on. Logistics are complex. Its best to think this is part-race and part-expedition.

The race is scheduled to begin at Kaluako’i on the western side of Moloka’i and end at Sandy Beach Park on East Oahu on the other side of the notorious 28-mile Ka’iwi Channel. We don’t recommend this swim to anyone. BUT, if you understand the risks and still want to compete, I think we’re all going to put meaning back in the term epic
.”

Bill Ireland, part of the winning Veterans team, will be back for more in 2014. “It was a great experience and much of the organization will be simpler the second time.”

Kozlovich and Haumschild, who have kayaked more swimmers across the channel than anyone else, cautiously remind interested swimmers, “Ka’iwi Channel is rightfully considered one of the most dangerous channels in the world and the ultimate decision to compete in this event should be heavily and carefully considered.”

For more information and to register, visit here at www.kaiwichannelassociation.com.

Photo of The Youngsters and The Veterans with Jeff Kozlovich and Steve Haumschild at the end of the 2013 competition is courtesy of Kaia Hedlund.