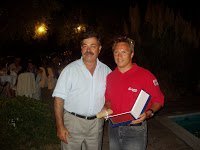 The Kalamata-Koroni Long Distance Swimming Marathon is one of the world’s greatest open water swims.

The Kalamata-Koroni Marathon is held annually in September across the Messiniakos Gulf in Greece, 30K (16.5 nautical miles) from Kalamata to Koroni.

While Mohamend Maarouf of Egypt (6:33) and Mouala Homa (7:00) from Syria are the respective male and female record holders for a single 30K crossing. Jay Benner of the USA is the two-way crossing record holder in 14:26 while Psilolignoy Sophia of Greece is the only woman who completed a 60K crossing to date (23:03).

On September 3rd, Hungary’s Attila Manyoky will attempt the first three-way crossing – 90K – the day before the annual 30K race.

Photo above shows Attila (on right) with Dimitris Vergopoulos, the Mayor of Koroni in 2004. This year he was nominated Honorary Cytizen of Koroni and has completed in 19 Kalamata-Koroni Marathons – an unprecedented record. Hopefully, he will add three more crossings on September 3-4.