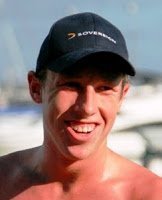 Kane Radford won the 2011-2012 New Zealand Ocean Swim Series with the final leg on Auckland’s North Shore at the 2.8 km King of the Bays where 1,400 others also took part. Kane remains on track to qualify for the Olympic 10 km Marathon Swim victory after setting a long-held 1500-meter pool national record at the New Zealand swimming championships.

Kane is on a roll, but there is always appreciation before the race starts. “With these kinds of [short] races, you never really know what’s going to happen because it all happens in such a short space of time. It’s great to be able to win this series back-to-back. To win the New Zealand ocean swim series is truly a title to be proud of so I’m absolutely stoked.”

Stoked for sure as he remains focused on another goal. “Preparations for [the Olympic qualification race in] Portugal are going really well at the moment. I’ve been doing my best times in the pool…so things couldn’t be better.”

Melissa Gorman won the women’s overall series as she won her third race as she head off New Zealand champion Cara Baker and defending New Zealand Ocean Swim Series champion Charlotte Webby in a time of 32 minutes 56 seconds, only 17 seconds slower than Kane. “I think for me this is always one of the toughest times to be racing. We just had our national championships a couple of weeks ago and when you’re getting back into hard training after that your body goes through a bit of a adaptation phase, which can make it very hard to come out and race.”

Melissa was pushed the entire way by Cara, another Olympic hopeful from New Zealand. “It was a really tough race with Cara. She was up with me the whole way so it was good to have someone to push me and I’m happy to come away with the win. I’ve really loved competing in the series this year and would love to come back next year, too.”