Kane Radford Doubles Up At The Oceania Championships 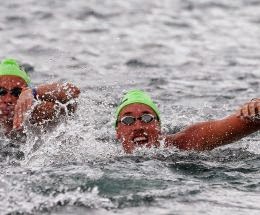 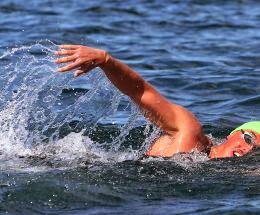 The pool events for the 2014 Oceania Championships will be held this month, but the 5 km and 10 km races were held in Lake Taupo back in January.

Kane Radford won his third straight victory at the State New Zealand Open Water Championships that also doubled as the Oceania Championships. He broke away with 1 km to go on the final lap and beat Japanese champion Yasunari Hirai and Australia’s Ridge Grimsey.

“[The race] went pretty well to plan,” Radford said. “I was a little bit cold in the first lap so I decided to go out a little bit in the second lap and try and keep warm by picking up the speed for the boys a bit. It ended up working out well to come out with the win which was the main goal out there today.”

The women’s 10 km race on Saturday was dominated by Sasha Downing of Australia, but the Oceania Championships was won by Charlotte Webby who finished in 2:09.01.

Radford won his second Oceania and national titles in a close race where he out-touched Japanese star Hirai who made the first swipe at the finish pontoon but missed. Radford quickly followed up with his next stroke. “It played out exactly how I wanted it to,” Radford said. “I sat at the back of the pack for the first lap and then Yasu took off on that second lap. I moved my way through the pack to get on to his feet. And then I just really waited until the last 300 meters where me and Yasu had a really tight finish and I just happened to come out and time my finish correctly. To be able to back up day after day it shows that I’m quite fit at the moment and that I’m in good stead for the rest of the year.