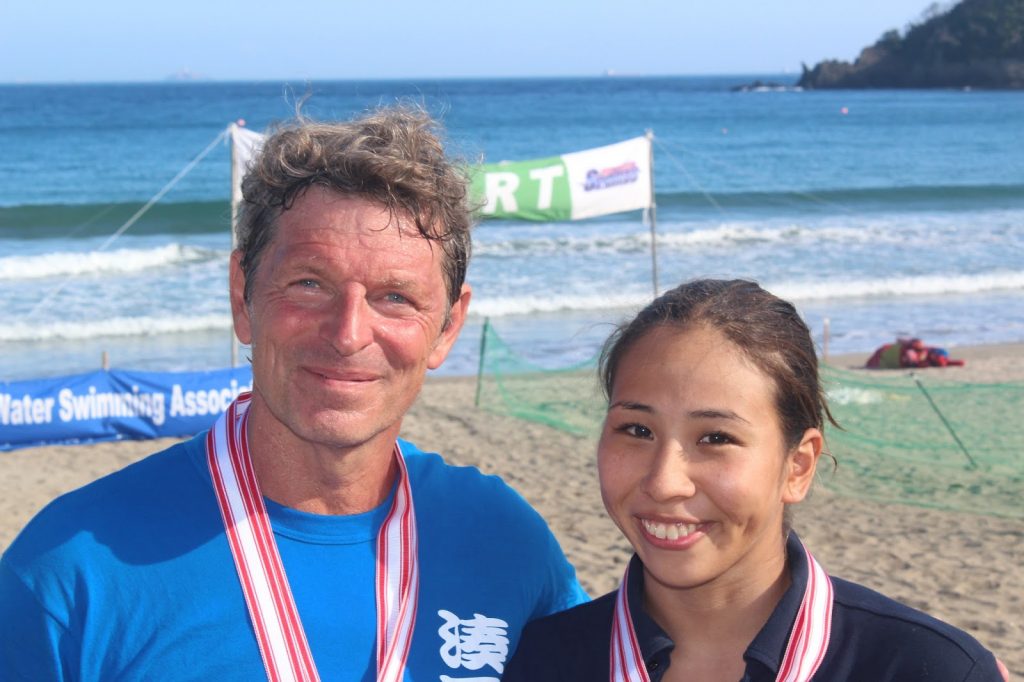 “It was a little cold and very rough in the middle of the course,” said 25-year-old Kaoru Yamanaka of Tokyo who won the International Masters Open Water Swim in Yumigahara Beach in Shizuoka, Japan.

Fresh off of her second-place finish in the Japan National Open Water Swimming Championships where her goggles were kicked off early in the race and she swam nearly the entire race without goggles, Yamanaka has proven she can deal with adversity. Humble as can be, she said, “My pace was not that fast“.

But her 34:39 time over the 3 km triangular course was 3 minutes ahead of the first man and plenty more over the rest of the field. “The waves were pretty tough and it was a new experience for me,” commented Glen Christiansen (pictured with Yamanaka). “The water was beautifully clear, but the ocean swells [from the remnants of the typhoon] made it tough.”

“We were quite worried that the swim would have to be cancelled because of the typhoon coming up from the south,” explained race director Yutaka Shinozaki. “We had to also cancel last week’s open water swim in Osaka, so we didn’t want to have to cancel this race too due to the conditions. But the typhoon turned and it turned out to be a beautiful day. But it caused the water temperature to drop and the ocean swells were pretty big as they came into the mouth of the bay. That made the back side of the course pretty rough. But this is open water.