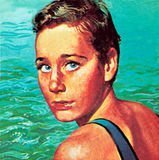 One of the most remarkable woman in the aquatics world lost her battle against breast cancer in Cape Town at the age of 60. Karen Muir, the child prodigy from South Africa who set 15 world records during her career, eventually became a physician and moved to Canada.

Muir also won 22 South African Championships and three US National Championships, but was not able to participate in the Olympic Games as her native country was not eligible during her remarkable career.

But the aquatic world recognized her achievements as Muir was elected to the International Swimming Hall of Fame in 1980. After hanging up her Speedos, she worked as a physician with her husband in the African interior before emigrating to Canada in 2000 where she practiced before she passed away yesterday.

Her last long distance swim before she was diagnosed with cancer was a quick 800m swim in the 2009 Prince George Citizen Iceman in British Columbia, Canada. she did it backstroke, of course, as part of the Ice Matrons team with Deirdre Goodwin, Claire Radcliffe, and Karen Bancroft. “A friend of mine, he knew I could swim and asked me to be on this team, so I did. It was grueling, but it was fun. I like this, I’m just not as quick as I want to be. I’ve been wanting to do this for four years.”

Her’s was a life well lived. May she rest in peace.