Kas Belediyesi, From Meis To Kas 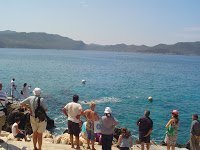 “The Kas Belediyesi, the 6th International Swimming and Marine Canoeing Competition from Meis, Greece to Kaş, Turkey, was awesome,” reported Ozden Ozturan of Istanbul. “The race is the Mediterrenian, so the sea was warm, crystal clear with little currents or tides. 144 swimmers from Turkey, USA, South Africa, England, Estonia, Australia and Northern Cyprus did the 7.1K swim.”

The Meis (Kastellorizo) is a tiny island with its population of a few hundred, a wonderful starting point for these open water swimmers. The race was the part of 13th Lykia/Kaş Culture and Art Festival with the race was at the closing date of the festival. 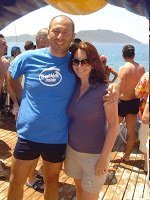 “There were two big boats which took us to the Meis Island, also called Megisti, the Greek island which is the closest to Turkish lands. There were no heavy currents along the course.

The water temperature was about 22°C (71.6°F) and the swimmers were provided water from the 20 canoes and boats along the course. People who wanted to watch the race close-up were able to rent boats from the Kaş Marina. The swim was limited to 120 swimmers who were able to swim 1500 meters under 30 minutes.”