Katherine Batts Giving It Her All 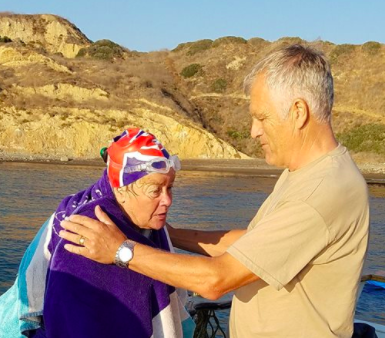 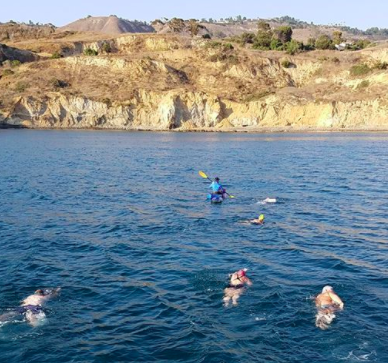 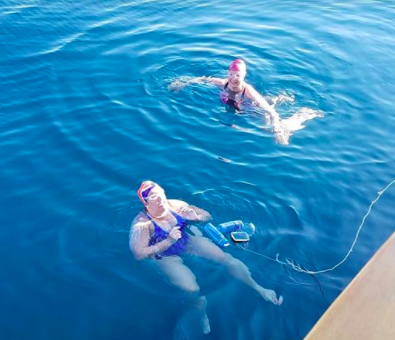 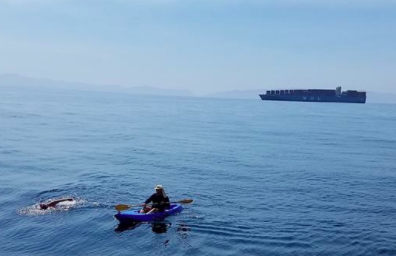 There is a whole lot of experience and passion between those two.

Murphy has done 34 English Channel crossings, including the first three-way attempt in history, North Channel crossings, and dozens of marathon swims from Sydney to Chicago. He has been the subject of television programs and newspaper articles, a face of the sport for decades. Muir has three English Channel crossings to his name. Meanwhile, Batts has also done a lot in the open water swimming world – mostly and unselfishly behind the scenes: as a crew member, administrator, volunteer, and coach, but also as a late-blooming swimmer and member of the Half Century Club.

This year, Batts added one more accomplishment to her distinguished career; she achieved the Triple Crown of Open Water Swimming. After 18 hours 28 minutes, she completed a crossing of the Catalina Channel at the age of 57 that added to her 22 hour 31 minute English Channel crossing in 2013 at the age of 53 and her circumnavigation swim around Manhattan Island in 2015 in 9 hours 36 minutes.

Since the age of 15, Batts has completed 16 English Channel relays and completed a 34.8 km crossing of Loch Lomond in 18 hours 7 minutes.

Batts has been a frequent participant in English Channel relays; it is clearly evident that channel swimming is in her blood.

Yet it took her time to go solo in the Channel. Spurred on by Murphy, Batts turned down numerous opportunities to attempt crossings of the English Channel throughout the 1970s, 1980s, 1990s and during the early part of the 21st century. But time has shown to be on her side.

As she matured from a teenager to a woman in her 50’s, Batts has always been there for others.

With her years of service and dedication to the sport, her focus was instead on the success and support of other swimmers whose dreams she helped realize. But at the age of 53 in 2013, her children were getting older. “My children were now 22 and 17 years old,” she recalled. “One finished university and one was starting [in 2014] so this was the time I could afford the time to train and financially afford [a solo crossing]. Kevin has been a close friend for 38 years and he finally convinced me to try it.”

Once she knocked off the English Channel, it was only a matter of time before she also attempted a swim around Manhattan Island and a crossing of the Catalina Channel in order to go after the Triple Crown of Open Water Swimming which is now in her rear view mirror.

For her achievements, both for others and herself, Batts was nominated for the 2017 World Open Water Swimming Woman of the Year among the following individuals:

Her nomination reads, “Katherine Batts has long supported channel swimmers as a fellow relay member, an administrator with the Channel Swimming & Piloting Federation, and a coach with The King’s Swimmers. With her 18th career English Channel relay completed in 2017 (on the oldest Ladies team), decades of service to help others achieve their channel swimming dreams (first with the Channel Swimming Association and now with the Channel Swimming & Piloting Federation), completed a swim across Lake Tahoe on the latest crossing in history, and as a coach mentoring others on the physical, mental and logistical side of the channel equation, Batts declined numerous invitations since the 1970’s to attempt a solo Channel swim. With her children grown and out of the house, the lifesaving professional was finally able to focus on herself and achieved the Triple Crown of Open Water Swimming in 2017.

For her four decades of selfless service to benefit and help other swimmers, for her kind, patient demeanor to support others in their dreams, and for her late-season Lake Tahoe crossing and Catalina Channel crossing that enabled her to become a Triple Crowner, Katherine Batts is a worthy nominee for the 2017 World Open Water Swimming Woman of the Year.

To register for The King’s Swimmers swim camp, visit here.

Photos above are courtesy of the Catalina Channel Swimming Federation.