Kathrin Lammers Honored By The Hall Of Fame 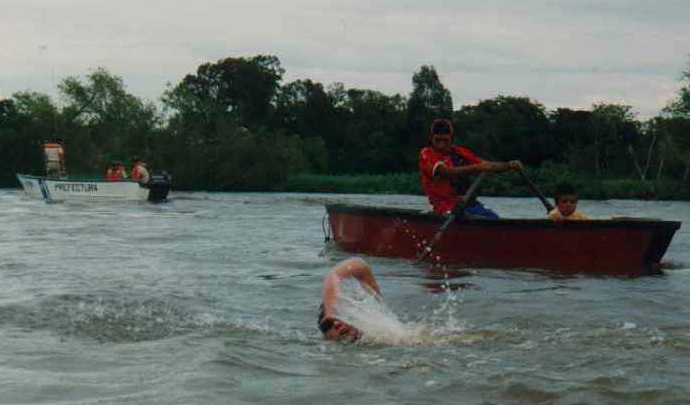 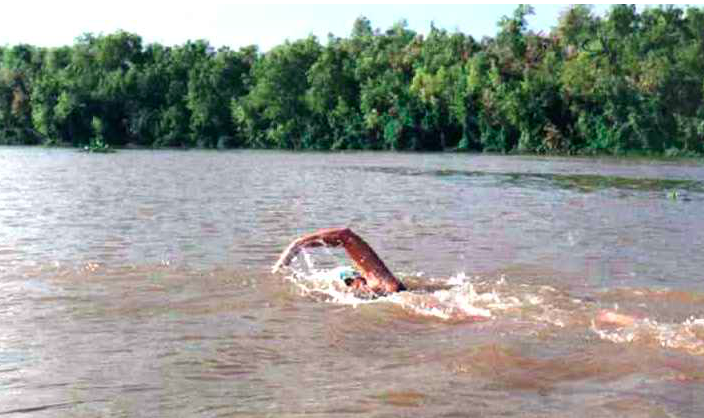 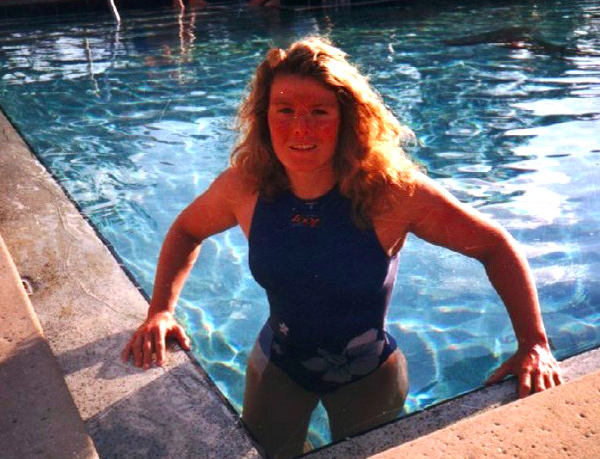 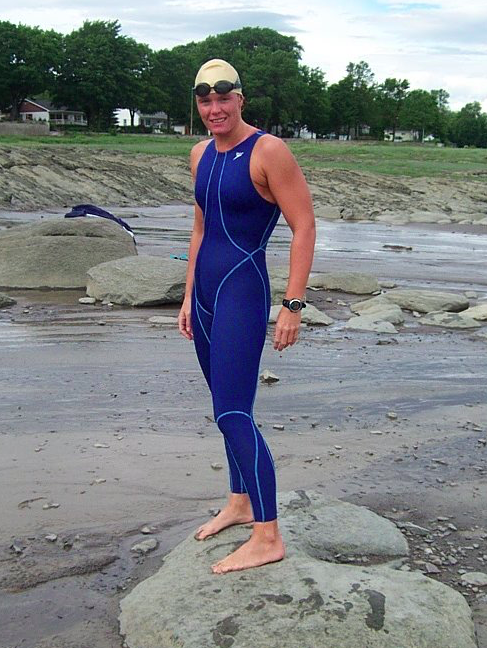 The Class of 2018 includes a competitive marathon swimmer from Germany, Kathrin Lammers who is currently living in Tervuren, near Brussels in Belgium.

She discussed her career below:

Kathrin Lammers: Being inducted into the International Marathon Swimming Hall of Fame is a tremendous honor. I am proud and happy about this recognition.

Kathrin Lammers: I believe my most satisfying swim was in 2002 at the 77 km circumnavigation swim around the Île d’Orléans in Quebec City, Canada that took 13 hours 32 minutes. The swim took place in the St. Lawrence River, the current was strong right from the start and after a while I felt the cold water creeping into my bones. It was the longest swim (timewise) I had ever done.

Kathrin Lammers: Traversée internationale du lac St-Jean in Roberval [Canada] was always a tough swim. The lake is hardly ever calm, the waves are usually high, and the water temperature is lower than in most races, especially at the start of the race where the swimmers have to swim through the water of the incoming river, near Peribonka.

Daily News of Open Water Swimming: What was your most memorable swim or race of your career?

Kathrin Lammers: My most memorable swim was the 1st 25 km FINA World Cup in 1997 in Rio de Janeiro. We swam along the Copacabana Beach and around an island near Ipanema. The landscape was beautiful, yet the races was challenging with changing water temperatures. The organisation was excellent and I really enjoyed myself in and out of the water.

Daily News of Open Water Swimming: Can you describe your typical mid-season weekly schedule, including your swimming workouts and dryland training?

Kathrin Lammers: A mid-season training was the result of gradually building distances, long swims on weekends where possible, and intensity. I would have built my distances up to about 100-110 km per week, while doing two gym session a week and usually one or threshold test sets where I would get my pace down significantly over, for example, a set of 20-30 x 100m swims within a 10,000-15,000m swim session. On other days, I would focus on longer sets and distances but also include a VO2 max set here and there. On the weekends, I would do a long swim in the sea, up to 5 hours.

Daily News of Open Water Swimming: What are some of the most beautiful beaches where you have swum?

Kathrin Lammers: The most beautiful beaches I came across were in Hawaii, doing the Maui Channel Swim relay. The water was unbelievable clear and blue. One of my favorites beaches was at a 10K race I did in Santos near São Paulo, Brazil. What I felt was so amazing about Brazil’s beaches was that they were still natural, the streets and walkways were still made with sand and palm trees that grew naturally around the walkways and beaches.

Daily News of Open Water Swimming: Who were your coaches during your careers?

Kathrin Lammers: I had several coaches throughout my career as I moved from country to country. When I swam at Santa Clara in California, I swam under Jay Fitzgerald and then under Dick Jochums. Coach Jochums was one of the toughest coaches I came across; as he was a great distance coach, I improved a lot. He is quite unique in many ways with his approach to coaching.

My big mentor at that time was Lisa Hazen who was also a distance swimmer. She introduced me to open water swimming and the FINA World Cup series. Later on, I had a Canadian coach who helped me with training programmes while coaching me through the Internet and telephone; his name was Jean-François Bergeron.


Daily News of Open Water Swimming: What are your favorite foods and drinks during your marathon races?

Kathrin Lammers: I fed on carbo-drinks, I think one of them was called Ultra-fuell, various electrolyte drinks, gels, bananas, and soft chocolate chip cookies.

Kathrin Lammers: I would like to get back into swimming on a regular basis which I find very difficult at the moment as my workload is very high and good masters swimming clubs are rare in the area.

Kathrin Lammers: Depending on the swim, some swims require a lot more attention when swimming in a pack or in areas where the current changes frequently, more focus is required. In other long races, I just let my mind flow.

“Kathrin was competitive in every race that she entered including the amateur events and professional marathon races. She is carrying on the tradition of sharing information and her passion in the sport with the next generation of swimmers and newcomers to the sport,” said Steven Munatones.

“Kathrin and the other new members of the International Marathon Swimming Hall of Fame emulate those exceptional 269 forerunners already enshrined in the Hall of Fame. Since the class of 1963, our marathon swimming inductees from around the world have received the ultimate marathon swimming recognition. They have been immortalized with their names inscribed on the IMSHOF Sea Goddess, our ‘symbol of the sea’,” explained Chairman Christopher Guesdon.