Katie Benoit Is A Heroine In The Water 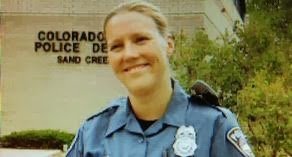 In 2012, a massive hail storm flooded an intersection near the Citadel Mall in Colorado Springs, Colorado. Katie Benoit jumped into action.

Being the experienced swimmer that she is, Benoit selflessly entered the rising, freezing waters and helped rescue people from their flooding cars.

She emerged a real-life heroine.

Which should not be surprising given the fact that Benoit is a police officer who completed the Triple Crown of Open Water Swimming with a 13 hour 13 minute crossing of the English Channel, a 10 hour 41 minute crossing of the Catalina Channel, a 8 hour 44 minute circumnavigation of Manhattan Island as well as other swims including the 12.5-mile Swim Around Key West in Florida and the 10 km Horsetooth Reservoir Swim in Colorado.

But today was a tough, tough test in the Molokai Channel under the escort of pilot Matt Buckman with the assistance of paddlers Jeff Kozlovich and Steve Haumschild. She started on Papohaku Beach on Molokai Island at 11:09 pm on Saturday night, and came into Sandy Beach on Oahu at 5:09 pm, 18 hours later after dealing with a whole lotta rough, very turbulent conditions in between.

With her husband as her feeder, Benoit had to swim through nasty conditions. “It was just a washing machine with white caps,” describes Linda Kaiser. “On a scale of 1-10 with 10 being howling winds and really bad conditions, I would say today was a 6-7. Katie got stung by Portuguese man o war. All she could say when she finished was how much harder this swim was than the English Channel.”

The 18-hour ordeal means that Benoit now has 3 Oceans Seven channels in her resume. “But her arms are pretty much toast and she might be using a straw to eat with for a few days. For more information for people who are contemplating swimming the Kaiwi Channel, they can go to our Kaiwi Channel swim blog and read about it. Bill Goding and I will help in any way we can. We know how much it costs in time and money and we want all who start to finish. Swimmers should allow a 2-week window if possible.”