Keep Left With Your Team Around Manhattan Island 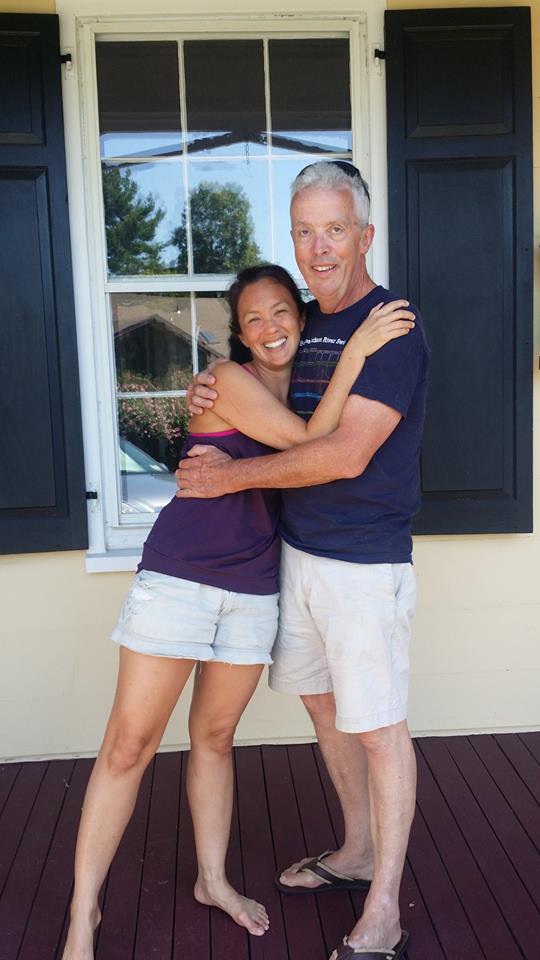 There were 32 finishers over the six separately conducted circumnavigations of Manhattan Island this year.

With an average age of 45.2 years, many of them swam their age (i.e., swam a greater number of kilometers than their age) in the Manhattan Island Marathon Swim.

Each of the finishers has a fascinating background and a different perspective of their swim around Manhattan Island including the King of MIMS, Kristian Rutford, the 55-year-old swimmer from Nebraska who completed his 21st circumnavigation.

40-year-old Michele Walters from Washington D.C. tells the story of her swim, guided by kayaker Richard Clifford below

Wow! I finished. I still can’t believe I swam 28.5 miles around Manhattan Island. I had a time of 7:46:11, which is a great time given the conditions. This was my first 20+ mile swim and it was a tough day, but I was able to put all those countless hours of training to good use.

I was so happy and honored to do this swim in Rachel’s memory, a dear friend, who passed away in 2012 from cervical cancer and raise funds for her charity of choice, The Foundation for Women’s Cancer.

I was so humbled to be in the company of a great group of swimmers on Saturday and make new friends. I was honored to be 1 of 4 women out of the 19 swimmers.

The swim started around 8:30 am. There were 8 waves of swimmers and I was in wave 3. I got on a boat with two other guys. We were all nervous with built up energy. I kept telling myself, 3 rivers, 3 different swims.

Waves 1 and 2 were off and then it was us up next. I jumped into the water and saw my kayaker, Richard Clifford, and thanked him for what was about to be a long day. As they counted down and the horn went off, I just shot out and swam hard.

We were instructed to hold our first feed until we were above the Williamsburgh Bridge. We started at Pier A and then made our way around Battery Point, missing the Staten Island Ferries and then swimming up into the East River where the currents were faster. I made sure to swim backstroke under the Brooklyn Bridge. I was in the lead by then, but the other waves of swimmers hadn’t yet caught up to me.

I felt like I was darting all over the place in the East River. With that being said, in terms of swimming, you never really know where you’re going since the kayaker is your eyes out on the water. It’s a completely different perspective when your body is half immersed in the water since you really can’t see or hear anything. It was also unnerving since I could feel things getting caught in my suit. I found out later it was sea lice, part of the course with open water swimming. Fun times!

After we made it past Hell’s Gate, things slowed down in the Harlem River where I knew the current would not be as strong. I got passed up by quite a few swimmers in the Harlem since I just have a steady pace when I swim, so I’m not as fast when it comes to flat water. I have a short stroke. I must admit, it was somewhat hard and almost defeating to see them swim by me. I was encouraged to swim faster, but I knew that I still had a long way to go and I was giving it my all.

This was the second river and I had one more to go. I kept swimming and doing my feeds (i.e., liquids and/or food) every 30 minutes. I was so tired. Every now and then I would see glimpses of the purple pinwheel that Rachel’s mom gave me. It was a reminder of all the reasons of why I was doing the swim and kept me strong.

As we rounded the corner of the Harlem into the Hudson under Spuyten Duyvil, I could feel the current pull us as well as the chop. It was cool to swim under the bridge since it happened to be open. The Hudson had 20 mph winds coming out from the SW, so we had a strong head wind. Richard started moving us out to what felt like the middle of the Hudson, but we held the line that we were given.

I was somewhat elated since I love swimming in chop, but there were quite a few times where I was just said out loud, “Holy crap!” Each wave would just move me up to where I felt like I was not moving. The winds were so strong that most of the swimmers and kayakers got pushed to shore. To keep the course, my kayaker had me swim at a 60-70° angle to keep from blowing into the Manhattan shore. It was a fun challenge and I graciously accepted what the Hudson had to offer.

The George Washington Bridge felt like it would never come. I swallowed so much water at that point. There was a constant thrashing and rocking with each wave and it wasn’t in any pattern to where I could time my strokes. I just had to keep swimming and kicking strong. As I swam under the George Washington Bridge, I decided to swim backstroke and started smiling at what an awesome experience it was to be swimming under the bridge.

I flipped over as I passed the bridge and just started swimming and kicking harder. There were times where I was just smiling thinking about how crazy it all was, but I knew I was at the last stage of the swim and that I could finish. I kept an eye out for the Freedom Tower, but it was hard to see over the chop and waves.

By then, I had swallowed so much water that my throat was parched from the salt water. I wanted to stop to drink something, but kept swimming until Richard would stop for a set feed. Each stop would only add more time to the swim and I knew it was hard for him to keep the kayak from turning him over with all the waves. I could see him constantly stabling himself in the kayak since the waves were hitting us from the right. We finally got to stop and I took a quick drink. I knew this would be my last feed since we were so close to the finish.

Since I breathe to the right, I didn’t see much of Manhattan. I saw Richard throughout the swim and near the end he gave me these really emphatic hand signals. It’s kind of hard to figure out what he’s saying when you just have to keep swimming and you can’t stop to ask, but I breathed to my left and could just barely see the other boats and kayakers, which meant swimmers. I realized he was telling me to kick it up in gear. I saw Ed, one of my support crew on the boat and he was waving the purple pinwheel. It inspired me and I swam with all my heart and gave everything I had.

I was able to pass quite a few swimmers since the chop was quite bad. I knew the end was close since I could see the Freedom Tower to my left. Richard decided to stay with me all the way to the end of Pier A. He started giving me all these hand signals to kick hard and I realized it was me and another swimmer near the end. I did a fast sprint and the other swimmer came from the other side and touched the buoy.

I was three seconds behind him. It turned out to be another guy that I swim with and we both gave each other a hug. I looked up and I could see Rachel’s family at the top smiling down and cheering for me. It was an awesome feeling.

I swam over to the boat and as soon as I got on, I was so elated and overcome with emotion. There was so much going on in my head at that moment.

I could not have done this swim without the support and love from all my family and friends that cheered me along the way and those in particular that made it out to the swim. A big debt of gratitude goes out to my support crew, Ed, Sophie and Beth. They were awesome with all my feeds and kept cheering me throughout the swim and posting all the updates. Thanks to Joe, our NYC Swim boat observer, who was so sweet to take stunning pictures throughout my swim. Thanks to my boat captain, Phil, who did an awesome job blocking boats in the Hudson and kept me and Richard safe throughout the swim. I definitely could not have done this swim without Richard, who did an excellent job kayaking for me, especially in the Hudson when she was rolling us with her waves.

It was a team effort and we gave our 100