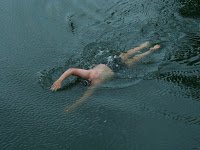 Dan Martin who will set off this April on his Global Triathlon by swimming from New York to France, has to mitigate risks in a variety of ways.

Including, evidently, running into trash.

And lots and lots of it.

Sea Education Association oceanographer Kara Lavender Law, the Chief Scientist on many educational voyages in the Pacific and Atlantic Oceans, revealed the discovery of a 1600K garbage patch in the middle of the Atlantic Ocean at the American Geophysical Union’s 2010 Ocean Sciences meeting this February.

Kara reported that billions of pieces of plastic trash have accumulated in a massive garbage patch in the Atlantic Ocean, similar to the the growing plastic vortex in the Pacific Ocean and, similarly, posing health risks to fish, seabirds and marine animals.

The debris can circulate for years, accumulating as the result of ocean currents. Student researchers with the Sea Education Association discovered the makeup of the patch, made up of mostly very tiny pieces of trash that came from consumer product litter either blown off open landfills or directly disposed of in the ocean.