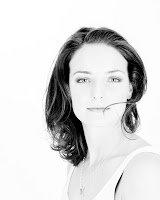 Keri-Anne Payne will face the weight of Great Britain’s gold medal hopes at the 2012 London Olympic Games. As the clear-cut gold medal favorite in the Olympic 10km Marathon Swim, the South African native possesses the smarts, tenacity, endurance and speed to meet these expectations. Time and time again in international competitions between 2008 and 2011, when the pressure is greatest and her competitors are primed, Keri-Anne has proven that her training, tactics and techniques are the best in the world.

Focused, quiet and intense before her championship races, Keri-Anne transforms into a media darling as she crawls out of the water after her races. She is personable and accommodating with fans, and remains patience and friendly with the press.

Attractive with a quick smile and twinkle in her eyes, she has the look of a cover girl Olympian and is clearly one of open water swimming’s greatest ambassadors. 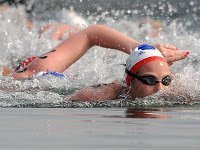 Underneath her calm veneer and physical elegance, she has the heart and drive of a champion that works hard day in and day out. Outside camera range and inside her training facilities, Keri-Anne has established herself for years as a tremendously hard worker.

A role model as a teammate, she puts in thousands of kilometers of gut-busting workouts, constantly building up lactic acid to almost impossible levels while ignoring the discomfort of endurance training.

From working on the tiny details of streamlined swimming techniques to macro issues such as race tactics and nutrition, she and her coaches leave no stone unturned in preparing for the Olympics as the gold medal favorite.

Keri-Anne‘s signature race tactic is to push the pace right from the start and challenge her competitors to keep up with her. Knowing this tactic in advance, the pressure to perform is transmitted from Keri-Anne to her rivals, creating a psychological edge that plays to her advantage. But since she leads the races from the start, her position at the head of the pack also places additional pressure on her to utilize her exceptionally high navigational IQ. One poor decision on navigation and her competitors can knock her off her pedestal. Even the slightest angle that she may swim off-course is an invitation to others who would gladly pounce on the opportunity.

But while her competition has continued to nip at her heels, they have also stayed behind her. For her navigational skills in the open water are second to none. From buoy to buoy or turn to turn, Keri-Anne is a true mariner, rarely moving off of the straight-line tangent between two points and playing all the elements, from the sun’s glare to the currents, as tools of her trade.

When combined with her well-developed aerobic conditioning and flat-out speed as an Olympic pool swimmer, Keri-Anne (#23 in the photo on right) also has repeatedly demonstrated intelligent race tactics in open water competitions. When her rivals start to close the gap on her, either on a straightaway or around a turn buoy, she does the small, often unseen moves that maintain the gap between her and second place. A slight veer, an increased kick, a higher arm turnover, these are the tactics that she effectively employs at all the right moments.

The sport, without a doubt, is physically demanding and rough like a mixture of rugby with marathon running. Elbows get thrown and body blows are given, sometimes intentionally and unintentionally. While tenacity is inherent in her DNA, Keri-Anne is never one to initiate physical contact. However, when faced with a belligerent rival, she also never backs down. Google-to-goggle or shoulder-to-shoulder, she is tough-nosed and uncompromising, confidently backing up her beauty with brains and, occasionally, brawn.

Her analytical approach to training and tough-as-nails approach to racing is what Keri-Anne Payne has come to represent. Armed with a media-friendly personality and smile, she deservedly stands tall among the elite echelon of open water swimmers.

Photo from the 2007 World Swimming Championships where Keri-Anne Payne was swimmer #23 is courtesy of Dr. Jim Miller.