Keri-Anne Payne Closes One Chapter, Opens Up Another 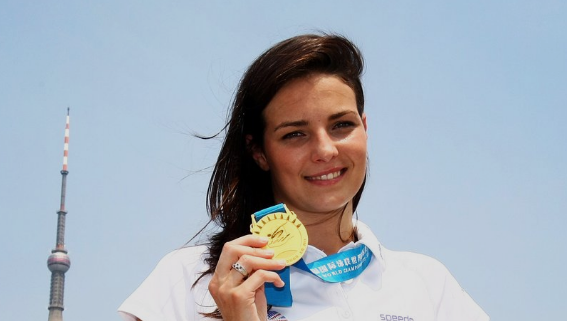 Keri-Anne Payne has touched a lot of people’s hearts during her career.

She combined a grace, an eloquence and a sense of competitiveness that is rare in swimming and among all athletes of every endeavor.

Her grace was recognized by those powerful and influential in politics, government and sports. Her eloquence is evident by her succinct post-race conversations with the media and her more lengthy explanations to swimmers from all walks of life. Her competitiveness has shown in races she won and in races she lost, whether in the pool or open water.

“I had the opportunity to meet her at the 2007 FINA World Championships in Melbourne. It was abundantly clear that she was going to make her mark in the sport,” recalled Steven Munatones. “Before the 10 km race where all kinds of blue bottles [jellyfish] were strewn all along the course; you could see a mixture of dread and focus on her face as she stood with the other swimmers on the shore gazing out to what she would later encounter. In a race where the competitors were screaming in pain as they got stung, Keri-Anne hung on tight and simply carried on.”

Within a year, she continued to train intensely and won a silver medal in the inaugural Olympic 10K Marathon Swim at the 2008 Beijing Olympic Games and then followed that up with two world championship victories in the 10 km marathon swim in 2009 and 2011. She was on quite a roll during that 2008-2012 quadrennial.

But then she faced the biggest test of her life at a time where she was also often on television, billboards and magazines, and newspapers. “Sponsors and the British media built up expectations so high for her before the London Olympics. Imagine having your fiance sitting next to the Prime Minister at the Olympic final in addition to the expectations of a nation on your shoulders. It was a tremendous burden,” recalled Munatones.

“She finished fourth in that race, but it was her post-race demeanor and continued efforts to come back in 2016 that really defines Keri-Anne. She continued to be involved in the sport, making appearances, giving speeches and serving as a humble, highly popular ambassador. Even after the disappointment in London, she carried on and made even greater contributions to the sport. That is simply who she is; so genuine and so passionate.”

As Payne explained about her Olympic experiences, her authenticity clearly showed. “In 2008 I had to explain what my event was, four years later I walked out in front of 30,000 fans for my race at the London 2012 Olympic Games. That was my proudest sporting moment.”

But although she announced her retirement from competitive swimming, Payne and her husband will undoubtedly continue to leave their influential footprints on the sport and all those who follow in their wake. She gave a full explanation of her retirement on January 23rd here. She also shared a handwritten summary of her thoughts online.

“The sport of swimming has given me life defining experiences, helped me find joy in taking on incredible challenges & created friendships that have enriched my life.

The decision to retire from competitive swimming has been made easy I continue to chase & fuel my passion inspiring people to share my love of open water swimming.

I’m delighted that my next chapter has already begun with my husband, David Carry. Our business, Triscape, has coached almost 1,000 people to get into this wonderful sport and taking on their next sporting challenge.

Thank you all so much for all the love & support over this awesome 18 year chapter of my life.”

Triscape’s upcoming events in 2017 include following swimming holidays along with additional retreats, camps and clinics: