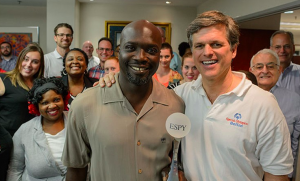 Courtesy of Special Olympics, Washington D.C. “I first met Kester Edwards at the pre-race dinner before the Tiburon Mile in San Francisco Bay in 2008,” recalls Steven Munatones.  “Kester had this broad friendly smile on his face and was absolutely beaming.  It was a happy occasion for sure – swimmers from around the world of all ages eating a pre-race meal on a lovely night, but Kester appeared to be the happiest of all. Initially, I could not figure out why he seemed so appreciative of standing around.” The answer soon came when race director Bob Placek introduced Edwards to the crowd. Edwards and his colleague Jon-Paul St. Germain were in San Francisco with a select group of Special Olympics athletes to participate in the Tiburon Mile for the first time.  “There was nothing special there, I thought,” said Munatones.  “I knew intellectually and physically disabled individuals were as capable of completing an open water swim as the next swimmer.” But it was a unique occasion: it was the first step in a global movement to bring open water swimming to the Special Olympics World Summer Games, the quadrennial world championships for Special Olympics International.  Edwards and St. Germain were lobbying, planning, organizing and asking for assistance to showcase the sport of open water swimming to the intellectually disabled community. “They had carefully and strategically developed their vision to convince decision-makers in Washington D.C. and at the 2011 Special Olympics World Summer Games to add open water swimming to their community,” said Munatones.  “In addition to data and information to convince administrators that open water swimming could be a safe and enjoyable athletic endeavor for the Special Olympics community, they needed to show athletes, coaches, care-givers, parents, and donors that these athletes could swim safely and competitively with others. Bob Placek and the Tiburon Mile volunteers were more than willing to help Kester and Jon-Paul achieve their goal.” After the athletes all safely completed the Tiburon Mile, it was time to head over to Athens where  the 2011 Special Olympics World Summer Games were to be held with photos, videos and data.  “It was admittedly a hard sell,” Munatones recalled.  “There was every reason why Special Olympics International and the World Summer Games did not want to add a 1.5 km open water swim to their schedule.   They said everything from ‘it is dangerous’ to ‘why introduce such risks to athletes’ to ‘no Special Olympics athletes do open water swimming anyway’. But for every excuse not to add the sport, we had valid and documented reasons why adding the sport would be an outstanding achievement and add to the legacy of the Special Olympics.  By adding an open water swim, the athletes could show that there are no limits to their abilities and skills.  The swimmers could venture beyond the shorelines and showcase their skills and their potential.” In Athens, more than 6,000 athletes from 170 countries took part including 35 open water swimmers who all completed a 1.5 km rectangular coast in the city of Marathon in the Aegean Sea.  “It was a seriously competitive event and the Greek hosts really helped to put on a great event.  But what was so touching was when many tears of joy were shed at the finish and on the awards podium by athletes, coaches, parents, care-givers, administrators and supporters.  The event proved that physical and intellectually disabled athletes could compete in a high-level international competition. Kester and Jon-Paul’s original vision had come to fruition – safely and enjoyable.”
That 1.5 km sea race was the start of a global movement that continued on at the 2015 World Summer Games in Long Beach, California and the 2019 World Summer Games in Abu Dhabi, UAE. Edwards’ passion for sports first took root in swimming, basketball, volleyball and soccer in his youth in Trinidad & Tobago; he competed in the 1987 World Summer Games.  But his passion and talents then transitioned to planning and administration with a whole lot of vision thrown in as a Special Olympics ambassador.  By 1995, he was serving as an official at the Special Olympics World Games in Connecticut. The long-time Special Olympics athlete was later named to the Board of Directors of Special Olympics International, and became a member of the first class of Sargent Shriver International Global Messengers.  He also received an Honorary ESPY award in 2017 [see television report here], given to him by Tim Shriver.
Edwards is now currently serving as the Manager of Sport and Development at Special Olympics in Washington, D.C., but his legacy is solidly cast as the person with St. Germain, who brought open water swimming to Special Olympics.
2019 World Summer Games Abu Dhabi 1.5 km Open Water Swimming Participants
Copyright © 2008-2019 by World Open Water Swimming Association