Kevin Murphy Versus The North Channel In His Own Words 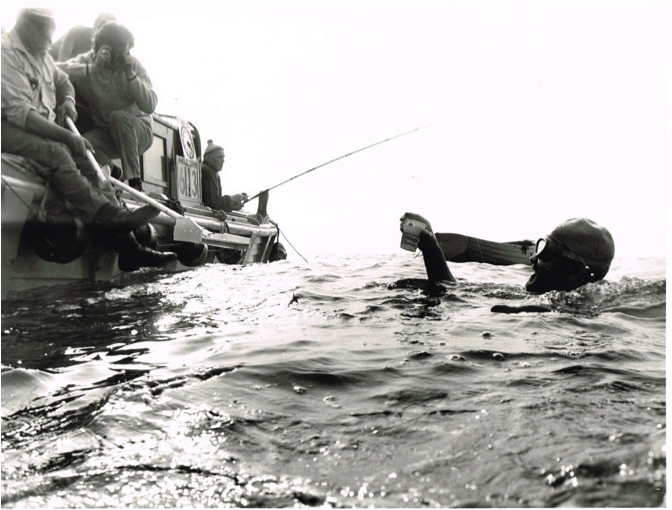 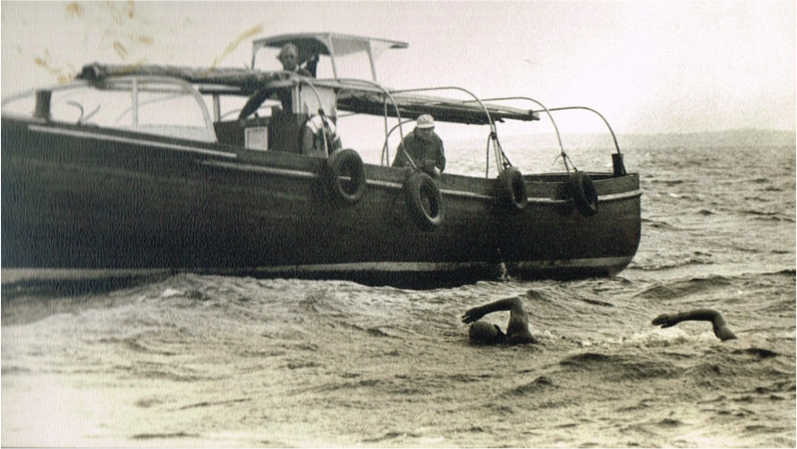 At the 2013 Irish Long Distance Swimming Association Awards, Kevin Murphy gave a captivating presentation of his 3 swims across the North Channel to a room of luminaries of the sport of open water swimming from ice swimmers to channel swimmers.

This is a bit of a trip down memory lane for me, so shout if you get bored.

I’ll concentrate if I may on my first North Channel swim because I like to think that’s what kick started the thing again – leading on to what we have today.

But I want first to take you back a little before that first North Channel swim – a month earlier in fact. You’ll see the significance in a moment. I did a two-way English Channel swim – only the third time it had been done and the first Brit to do it.

You might notice the bloke fishing while I was feeding. That was my coach, Fred Seagrove. Things were fairly relaxed.

So I completed the two-way English Channel in just over 35 hours and there was a fair bit of publicity. Now as it happens a chap called Freddie Parkes saw those stories. I’m not sure how many people here now remember him. He was the secretary of the Irish Long Distance Swimming Association. I well remember being just back home in north-west London when out of the blue there was a phone call. “You won’t know me,” said Freddie, “But I wonder whether you’d be interested in coming over to Northern Ireland to try the North Channel.

It’s tough. It’s very cold. There are lots of jellyfish. And it’s known here as the Killer Swim because the first swimmer to do it dropped dead a few years later – the story goes that his blood was thickened by constant immersion in cold water and it caused a blood clot. And the last swimmer to try it died during the attempt
.”

He sold it well, did Freddie.

But how could I resist.

So here I was a month later in Northern Ireland – an interesting place in 1970 as I’m sure you know better than me.

That’s Freddie and my coach Fred Seagrove in the Campbell College pool. Fred Seagrove as you may remember was the bloke fishing a couple of pictures back. 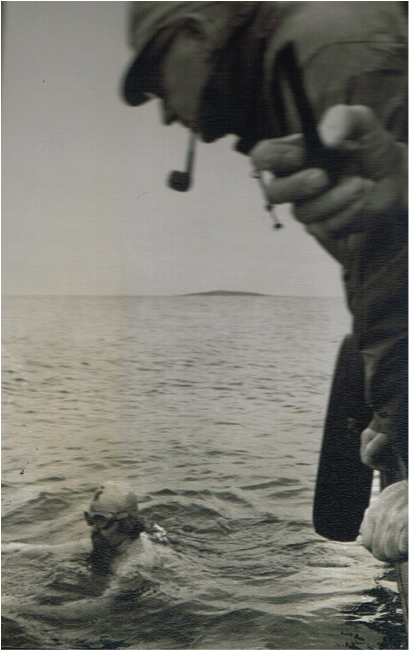 And a bit of a training stint in the North Channel with Captain William Long (shown on left) looking on and Eddie Laird at the wheel of his boat. Capt Long was another interesting character – Minister of Education at Stormont and a bit of a North Channel expert in his spare time. Eddie Laird was also a well-known character in Bangor. He promised me he’d give me one of his dinghies if I ever did a two-way North Channel. Sadly I never did. They were nice boats.

Anyway, what I was quickly discovering was that Tom Blower was to the North Channel what Capt Matthew Webb was to the English Channel.

After Blower did it in 1957 all the greats of the 1950s and early 1960s came to have a go – many of them the ones who took part in the Billy Butlin races across the English Channel. They came, they tried and they went away disappointed. More than 20 years on from Blower nobody had done it.

Why anybody thought I could do it, I’m not sure. But here I was.

I waited. The weather was bad but the Imperial Hotel in Donaghadee was nice and the Belfast Telegraph was picking up the bill. The Telegraph had to get their money’s worth so there had to be a story every day. A reporter called Marin Lindsay was assigned to me. He told me later he wondered what he’d done to deserve having to babysit a big hairy, greasy swimmer.

They took me to a dentist to make sure I wouldn’t have toothache during the swim. The army took me to the wall dividing the Falls and the Shankhill. I had a dip in Pickie Pool in Bangor. They had to have a story each day. 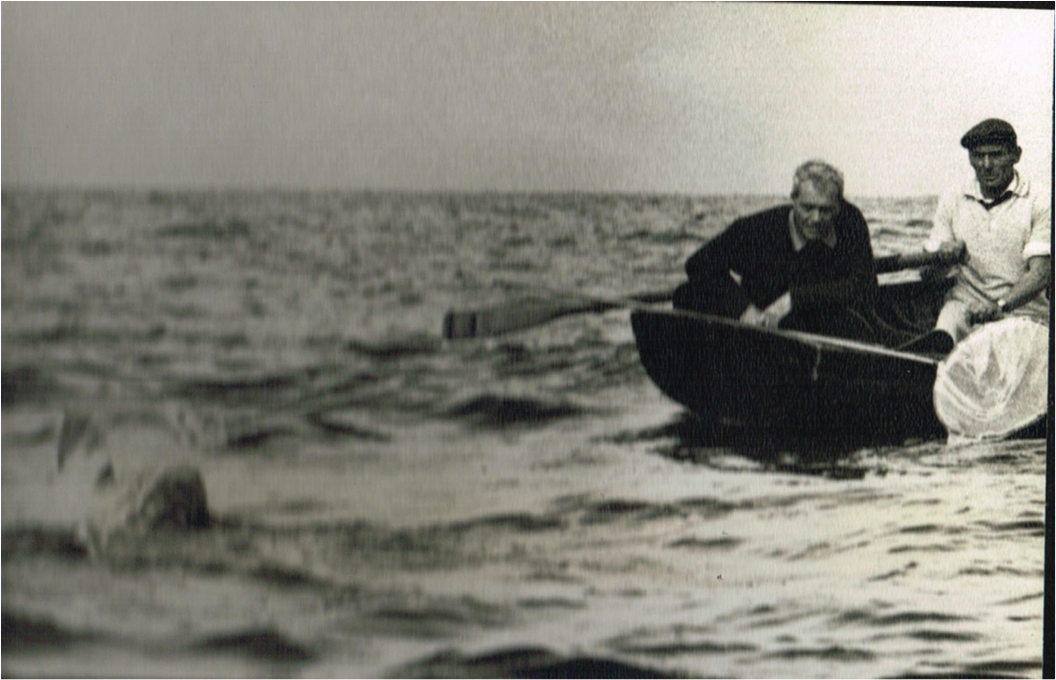 One night there was a big party going on at the Imperial Hotel. It was rather fun, but Capt Long seemed desperate to get me to go to bed. I woke up the following morning to discover the reason. I was off. A big storm had blown through. The forecast was good.

In those days, as you can see, I had plenty of padding under my swim cap and I greased up fairly heavily.

Vaseline for chafing and a mixture of lanolin and Vaseline on the rest of me. 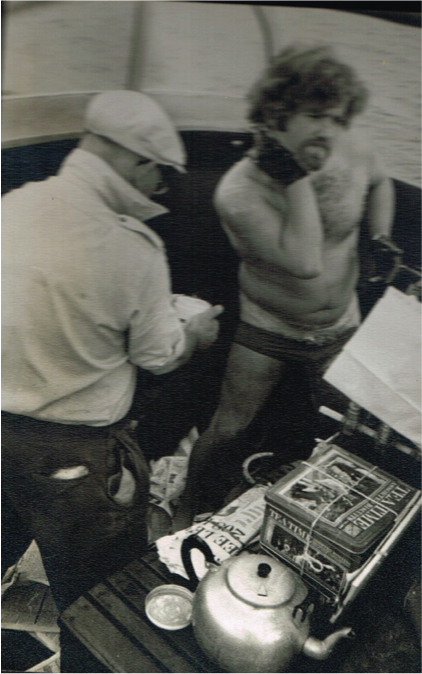 I reckoned it did for me what it does for a sheep on a drafty hillside – it might not make much difference under water, but it sure as hell did wonders for the wind on my back.

The start at Orlock Point. Is that still the starting point?

“A good place to start,” said Capt Long because of the tides sweeping around the Copelands, nine hours one way and three hours the other. Seemed a bit unusual but who was I to argue. 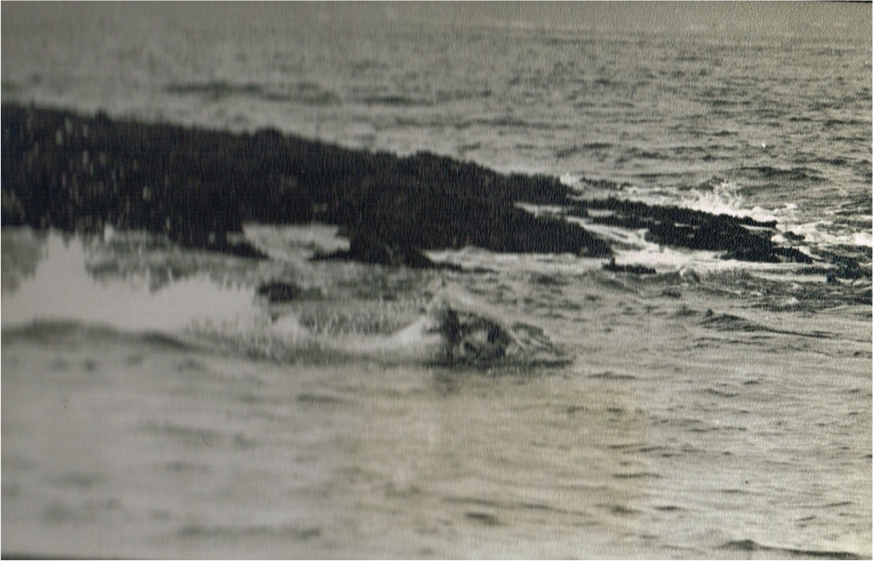 And then came the jellyfish. And did they come. With a vengeance they came. There were the big hairy red-brown footballs – Lion’s Mane if you like. There were big spidery looking ones and there were giant mushrooms with long tails. So they launched a row-boat and tried to fish them out with a keep net. For every one they caught, another ten got through.

I’m not sure whether it was this occasion or one of my future swims when they gave up trying to fish them out because there was such a mound of jellyfish in the boat, the bloke rowing could hardly see the bloke at the back.

Capt Long here reckoned that there were more jellyfish than usual and more different types than usual because they’d been brought in by the storm. That was supposed to be a comfort.

But on I went. And it was going rather well until a couple of miles out from the Scottish coast the tide seemed to want to take me back the way I’d come.

“You can’t complain,” said Capt Long. “You had a bit of a push from the Copelands at the start.”

It was getting rough and it got very dark. The locals came out from Portpatrick with their cars, shining their headlights from the cliff tops to show us the way. No GPS in those days.

I was coming in just north of the Killantringan lighthouse and there were lots of rocks. I think about a quarter of a mile off the shoreline, the escort boat stopped and a dinghy accompanied me the rest of the way in, threading a way through the rocks. 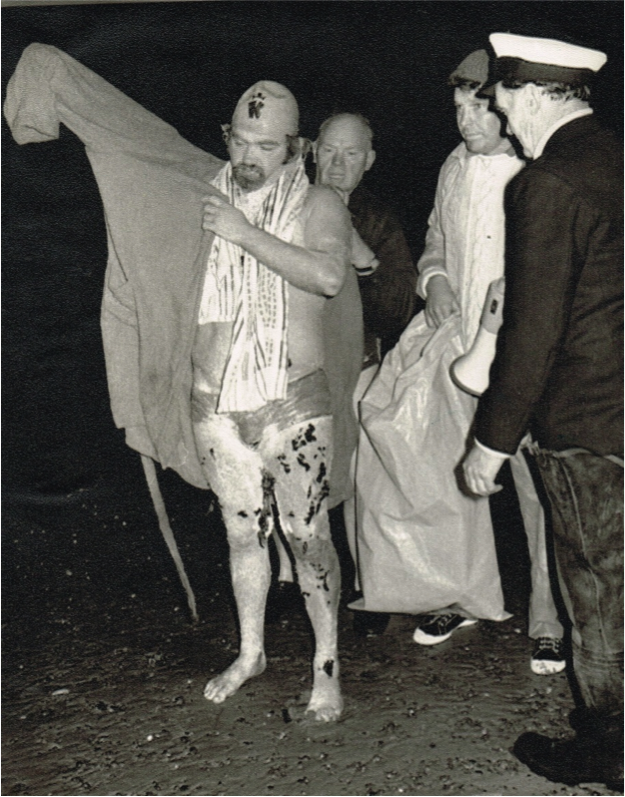 The black stuff on me is seaweed where I came a little to close to the rocks. A few Well Done’s, You Made It and we all piled back into the rowboat to head back out to the motor launch. They rowed. I sat back and let them get on with it.

And a wave came over. They rowed. Another wave came over. And when the oars floated away and the rowboat was sitting on the bottom, we knew we were in trouble. There was no way out through the waves and the cliffs were behind us. We were marooned on the beach. So we climbed the cliffs. Somebody in front pulling me and somebody behind pushing – trying to avoid the barbed wire halfway up. We got to the top of the cliffs and piled into one of the cars up there which had been shining headlights out to sea. It took me to the lighthouse. 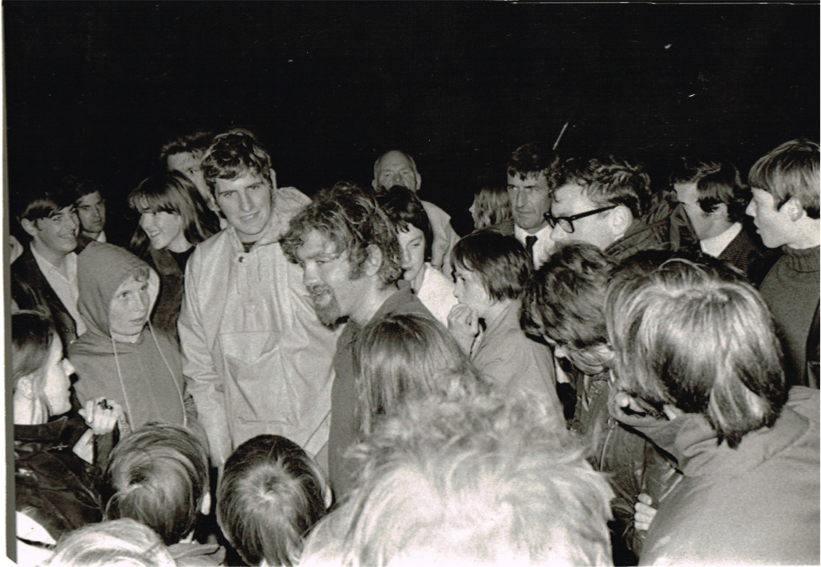 Imagine the scene if you will: Me banging on the door of the lighthouse asking to come in for a bath.

The lighthouse keeper opened the door to find a bloke covered in grease and seaweed and very cold and damp. “I’ve just seen you on the telly,” he said. ”Setting out on your swim.”

I had my bath in the lighthouse – suffering badly now because of the jellyfish stings – and then I was taken to the lifeboat house at Portpatrick to meet up with my boat and crew – and as you can see I was rather mobbed by wellwishers.

It was a novel experience for somebody more used to a disinterested Frenchman walking his dog on the beach and taking no notice as you wade ashore. Anyway, I was given a sedative to help me sleep off the effects of the jellyfish and we got back on board Eddie’s boat for a very bumpy ride back to Bangor.

The 23-year jinx on the North Channel was over and I like to think that it’s thanks to this swim that the North Channel came back on to the long distance swimming map. I still reckon that mile for mile, it’s the toughest swim there is. I’ve repeatedly told Steve Munatones that and I reckon that’s why he included it in his Oceans Seven challenge.

What none of us knew then was that it would take a swimmer of the calibre of Alison [Streeter] to break my record of 11 hours 21 minutes for the swim. And the male record stood for 43 years – broken last year by Milko van Gool.

Just briefly if I can touch on what came next. I’d done it one-way so what could be more natural. I wanted to do a two-way. 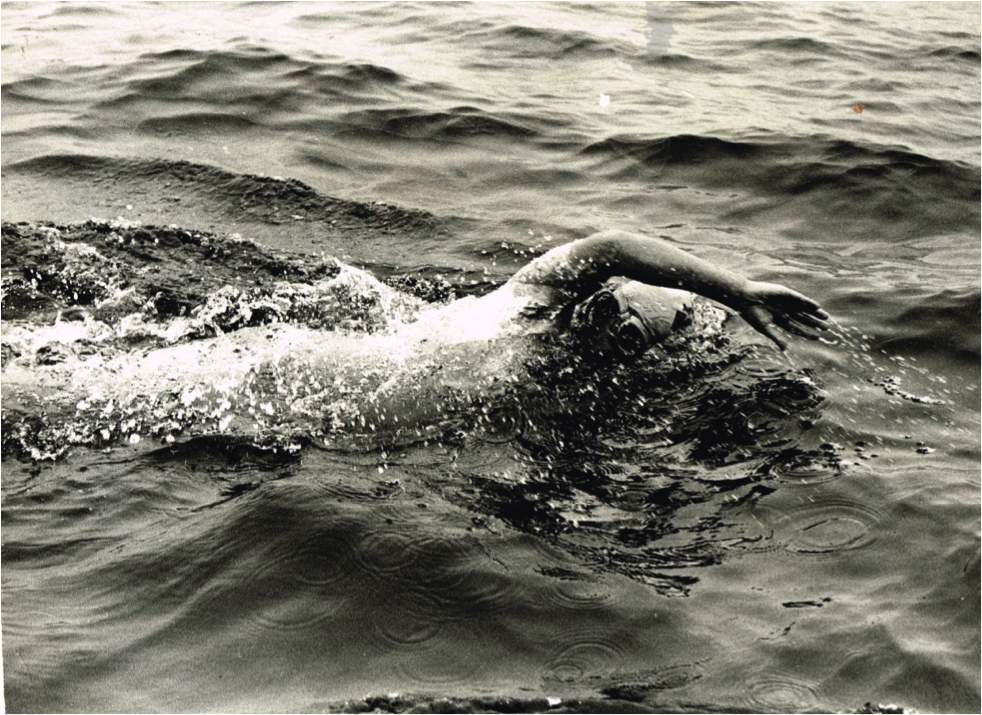 If I remember this was the year [1971] we stuck a boom out from the side of the boat with a net hanging down to try to catch the jellyfish.

It didn’t do much good because they built up on the net, then started filtering through and I ended up swimming in jellyfish soup. As I quickly discovered that shredded jellyfish still sting. I made it one way again, but I was too badly stung for the return.

But it became apparent on the first leg that I was being so badly stung I hadn’t got a hope of a two way – and the one way was going to slower – so I aborted. And that was it until 1989.

By now Alison had been busy in the North Channel and it revived my interest. I thought I’d give the two-way a try from Scotland to Ireland and back to Scotland. Quenten was the pilot and it started off well from the rocks below Kilantringan lighthouse. But the weather turned.

As Quenten said, ”Conditions got worse. At times we had Force 4 northerly winds which was practically the opposite to what was forecast.“ It seems I had a close encounter with a turtle, although I didn’t quite realise it. We could have done with more turtles to eat the jellyfish because I was being badly stung. I landed a mile north of Blackhead lighthouse, but it had taken more than 17 hours. The water temperature was only 52ºF (11ºC) and a return was impossible. So I was carted off to hospital to recover from the jellyfish stings.