Donned in neoprene, Kiko has completed several ocean crossings along the beaches of Brazil, many in the city of Rio de Janeiro, but the Travessia do Leme ao Pontal was his longest and toughest swim to date. Adherbal de Oliveira reports, “Kiko has spent a lot of time planning and assembling a team of multi-disciplinary professionals including his doctor, nutritionist, pool and open water swimming experts.

These were months of preparation in which he had to divide his attention with family obligations and work with the long series of long training swims of more than four hours.

His swim started at Leme Beach at 11:04 pm on August 8th under starry skies with calm seas and light winds. His primary goal was to have fun and complete the longest crossing in Brazil. Kiko kept up a very good pace, maintaining a constant rate of 56 strokes per minute throughout the 36 km course.

The water temperature was a factor that worried Kiko a little, but with a crystal clear water of 23°C, Kiko felt very comfortable, showing plenty of joy and optimism. 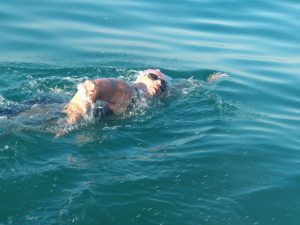 After five hours, Kiko had already surpassed São Conrado Beach, known for the strong currents and waves which always tests the psychological of swimmers. Kiko continued advancing along the course during a beautiful morning in the city of Rio de Janeiro, where its sights such as the Cagarras Archipelago, Sugar Loaf Hill and Pedra da Gávea.

After 11 hours 16 minutes, Kiko – the 25th solo swimmer of the Travessia do Leme ao Pontal – completed the largest and most beautiful crossing in Brazil and was welcomed onshore with a large party organized by many swimmers and family at Praia do Pontal.”

Linda Ashmore Wears A Watch For A Reason