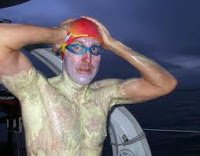 “Unfortunately, Mother Nature isn’t playing the game,” emailed Chris Palfrey about his delayed start in his Green Island swim. “A southerly change is expected to pass through Cairns, making conditions very rough. We put the attempt back to November 13th-14th.” So the treacherous swim amid sharks, crocodiles and the chironex fleckeri jellyfish, the most venomous creatures on earth, will have to wait.

Chris will be trying to replicate the incredible swim of Eddie Lovelock, a driven young man who at the age of 14, completed the first swim in late November, 1977 from Green Island to Cairns in 8 hours, 33 minutes, 10 seconds. Not to be outdone, Eddie came back in December 1978 and successfully crossed the channel in other direction from Cairns to Green Island in 7 hours and 34 minutes. The story of Eddie, who passed away at the too-young age of 32, is found here.