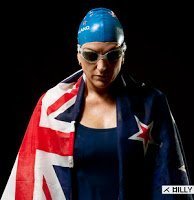 Faced with an upset stomach early in the swim, the former ballerina still had enough in the tank to power through the lake high up at 6,225 feet (1,897 meters) altitude in the Sierra Nevada Mountains between California and Nevada.

“It took me 3 hours longer than expected. I was very ill in hour two, but I survived the remainder of the swim on less than 100 calories per hour.”