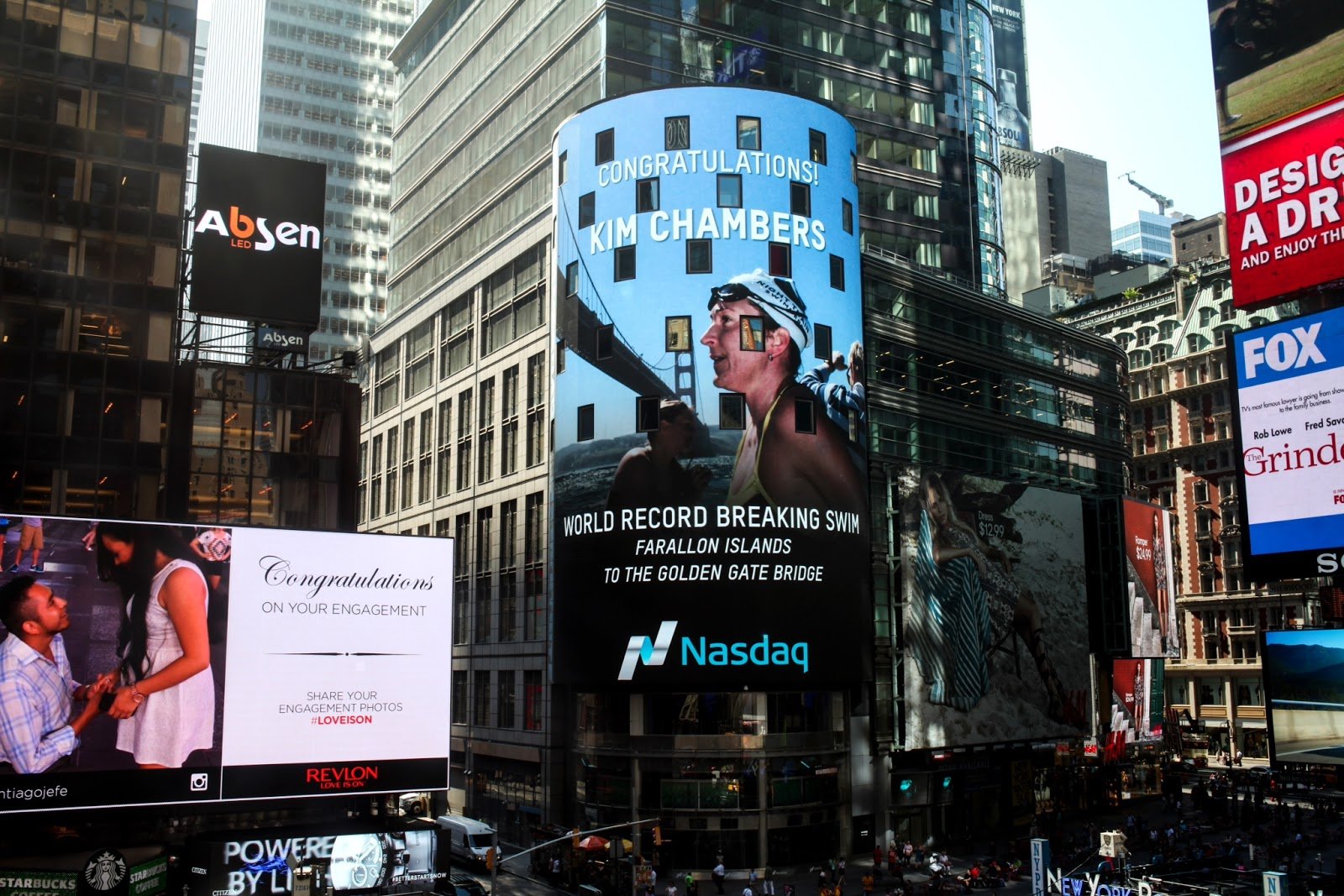 In the heart of Manhattan smack dab in the middle of Times Square, Kimberley Chambers‘ latest marathon swim is being celebrated on the NASDAQ MarketSite.

The reason for Chambers’ current recognition all started in 2007. After a freak accident where doctors informed her that she faced only a 1% chance of walking unassisted, her leg was being scheduled for amputation.

Diagnosed with Acute Compartment Syndrome in her right leg, which was eventually spared, the former classical ballerina and rower at University of California Berkeley, felt she had the mental fortitude and physicality to prove the medical experts wrong. After enduring multiple surgeries and two long years rehabilitation, she began to swim regularly in 2009.

Seven months after donning goggles, she swam from Alcatraz to Aquatic Park and then later that same year, she ran the Quad Dipsea ultra-marathon.

It was the start of a lot more time training and adventuring.

In 2011, Chambers participated in a relay from the Golden Gate Bridge to the Farallon Islands. In quick succession, even as she balanced a stressful position in Silicon Valley, she swam on a relay across the English Channel, a relay around Manhattan Island, and completed solo swims of Cook Strait, Lake Tahoe, Molokai Channel, Strait of Gibraltar, Catalina Channel, English Channel, Tsugaru Channel and North Channel.

In 2012, she was on a Night Train Swimmers relay that attempted a swim from San Francisco to Santa Barbara. After six days of swimming around the clock – day and night – and enduring horrific jellyfish stings, the relay was forced to abort after swimming 181 miles (291 km). Despite falling short of breaking the record for the longest continuous relay, the team proudly raised over US$1.2 million for Semper Fi Fund.

By September 2nd 2014, the 37-year-old Chambers was as prepared and hardened as she had even before before. She needed every last bit of preparation and hardening for her North Channel crossing between Northern Ireland and Scotland where she had to endure hundreds of jellyfish stings during a 13 hour 6 minute crossing.

Chambers often says that her injury was the best thing to ever happen to her. Certainly the aftermath is quite impressive…and not yet finished.