King and Queen of the Sea Light Circuit and Challenge 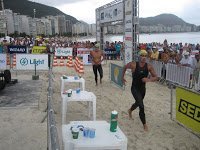 The King and Queen of the Sea Light Circuit and Challenge are going to stir things up on Copacabana Beach in Rio de Janeiro, Brazil.

Next week, world-class professional and amateur swimmers from all over are heading to Brazil’s 2016 Olympic 10K Marathon Swim course for the King and Queen of the Sea Light Circuit and Challenge (Rei e Reinha do Mar) on December 10th, 11th and 12th. “The fact that Rio is hosting the King and Queen of the Sea Light Circuit, a competition that was voted among the top ten swimming marathons in the world, demonstrates the city’s preparedness to hold events of the magnitude of the World Cup and Olympic Games. It is gratifying for Light to be a part of a project like this that portrays to perfection the healthy habits of cariocas,” says Paulo Roberto Pinto, New Business and Institutional Officer for Light, a master sponsor of the event. 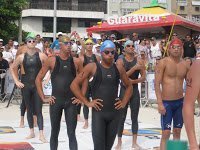 Pedro Rego Monteiro and Virgilio de Castilho of Effect Sport envisioned and created the King and Queen of the Sea competition and came up with innovative practical solutions to showcasing the sport of open water swimming.

From start lines to bleachers on the sand, they also set TV cameras on high cranes on the beach and arm scuba divers with cameras in the water to catch all the action.

They put the feeding stations on the soft sand beach so the athletes have to hustle out of the water and run past the cheering crowds and pulsating music by Zero Calibre who created the event’s theme song.

After, the top female swimmers will compete for the title in the Queen of the Sea Light Circuit. On Sunday, the top marathon swimmers will compete for the King of the Sea Light Challenge which will be broadcast live by Rede Globo during the TV program Esporte Espetacular. In an exciting start to the competition, the starting positions for both the male and female pros will be decided on the day before race day when the swimmers will sprint a short race for a better starting position.

“The King and Queen of the Sea will bring 20 of the best swimmers in the planet to Rio de Janeiro including world champions like Chad Ho of South Africa. Not only will the King and Queen of the Sea give visibility to millions of people from Brazil and around the world through live broadcast by TV Globo, but will also give exposure to Copacabana Beach and our ability to carry out large sporting events for the world,” explained Pedro.

Celebrities will also take part in the third and final phase of the King and Queen of the Sea Light Circuit. Cynthia Howlett, host of the GNT television program Alternativa Saúde, and comedian Hélio de La Peña from TV show Casseta e Planeta, and reporter TV reporter Smigol from Sportv will all jump in the water.

After Australian pro Trent Grimsey won the trident at the 2009 King and Queen of the Sea Light Challenge, his brother Codie is coming to Rio de Janeiro to represent the family name. Team Brazil will have five top Brazilian athletes and Team World will have five top international athletes. Their starting positions will be determined by a 1K sprint televised on Rede Globo’s Esporte Espetacular. Although the athletes will compete as individuals, the team that scores the most points will be crowned Team King of the Sea.

Although last year’s course was creative and fun, Open Water Source believes this year’s course will even be more creative – and difficult. The athletes must navigate ten 1K legs with a short soft-sand beach run between each leg. 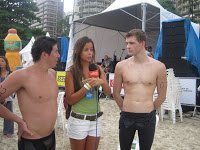 On the women’s side, Rede Globo’s Esporte Espetacular will broadcast live the 1K sprint for the starting positions and the seven 1K loops that the women will compete in on the following day.

The professional athletes will be competing for nearly US$30,000 in prize money.

A portion of the proceeds from the competition will support the construction of Hospital do Institution Pró-Criança Cardíaca, a hospital that specializes in children with heart conditions.

Instituto Benjamin Constant, another partner of King and Queen of the Sea, will help support visually impaired athletes take part in a 2K race by swimming side-by-side with another athlete. The visually impaired athletes will be accompanied by guide-swimmers including Leonardo Costa, a Pan American Games gold medalist, and Grigori Matuzkov, a member of the 2000 Kazakhstan Olympic team. 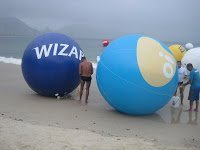 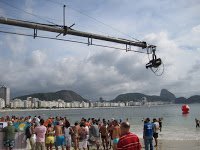 Open Water Wednesday will interview the athletes from Rio. With so much going on, it will be non-stop action from Brazil.

Huge turn buoys, giant television audiences, prize money, sprint races, charity swims…lots to be excited about down in Brazil where they know how to organize a party and great open water swims.